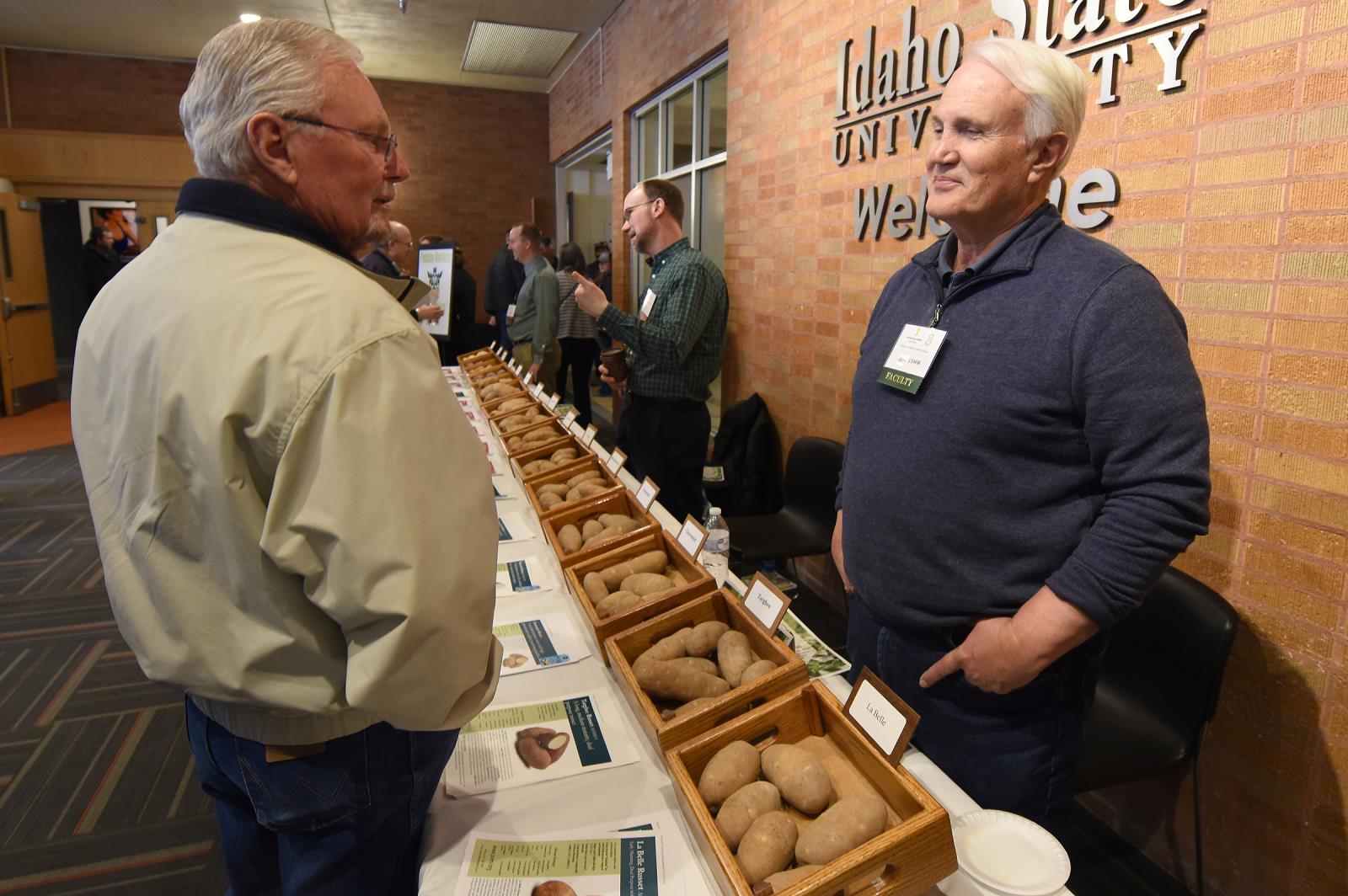 Jeff Stark’s retirement plans would just have to wait. With only two and a half weeks until his retirement, Stark was busy completing all the necessary paperwork for the release of the Galena Russet, a new potato variety.

Stark had been the director of the University of Idaho’s Potato Variety Development Program since 2006 and he estimated that the Galena Russet was the 22nd or 23rd variety released during that time.

With his retirement on Jan. 24, this would be the capstone to his career.

Stark came to Idaho in 1981 after completing his Ph.D. in soil science at the University of California at Riverside.

He was hired to be a UI research and extension potato specialist, but he was only a few months into that job when a position opened up for a research agronomist dealing with potatoes and small grains.

“I decided that I would throw my hat in the ring and they said, OK, we’ll put you into that position as long as you help us find a replacement,” Stark said. “So, I did and I guess that started my 23-year career working on management systems for potatoes and small grains.”

He said his work during that time included fertility and irrigation research and “everything in between.” The majority of his work was at the Aberdeen Research and Extension Center, with additional research at the Kimberly, Parma and Tetonia R&E centers.

Looking back over his 39-year career, Stark has witnessed the evolution of eastern Idaho’s agricultural landscape.

“Certainly in potato agriculture, in this state and most other states I’m familiar with, the farms have gotten a lot bigger (with) a lot fewer farmers,” Stark said. “And so the economics of scale have driven growers into larger scale production systems so they can utilize that equipment and spread it across a larger operation.”

Stark said that as the farms grew larger, the interaction between researchers and potato growers changed.

“Back in the early ‘80s I think there was a lot more direct contact between the growers (and) university researchers and extension specialists,” he said. “Now we tend to deal more with the farm managers, the foremen, that manage certain parts of the farm. That’s one of the things that’s changed a lot.”

In 2005, Stark accepted the opportunity to become director of the PVDP.

The last 15 years he has worked closely with members of the USDA program at Aberdeen as well as members of the tri-state potato breeding program, which includes researchers in Idaho, Washington and Oregon.

He spoke with a sense of accomplishment when discussing the varieties developed during the past 15 years through this team of researchers; however, he acknowledged that it can be difficult to persuade growers and processors to switch to newer varieties.

“I have a little bit of a bias now working on the PVDP with these new varieties,” he said. “There’s a lot of these new varieties that have a lot of attributes that are so much better than the old, standard varieties but we’ve built the industry on these standard varieties. I don’t know that there are very many crop industries, certainly in the United States, that are more tradition based than the potato industry in Idaho because the industry was built on the Russet Burbank potato.”

Stark cited a number of varieties that have come through the Idaho program that have shown great potential return for growers and processors.

“Varieties like Ranger Russet and Alturas and Umatilla Russet have come on board and now Clearwater Russet have come on board and added quite a bit to the potential return for growers and processors,” he said. “But I think that there’s a lot of potential there in the potato breeding arena for improvement. I think as we move into new breeding technologies that make the whole program more efficient and more directed to address particular deficiencies, particular genotypes, I think those will be areas that could be major advances.”

Stark was non-committal about any future work with the potato industry but he didn’t rule out the likelihood that one might run into him at future field days or research trials.

Should he decide to take on any consulting work, it will probably be on part-time, short-term assignments, he said.

Phil Nolte, a seed potato specialist, worked with Stark from 1991 until Nolte’s retirement in 2015.

“He’s an excellent leader. He’s the kind of person who has that authoritative air to him and you just sort of naturally listen when he starts talking. He is a consummate professional,” Nolte said.

“He cares deeply about the program, he gave everything he had for it,” said Jeanne Debons, executive director of the Potato Variety Management Institute, which serves as the promotion and marketing arm for the tri-state potato variety program and collects licensing fees and royalty payments for its potato varieties.

“I think he’ll be remembered as an excellent contributor to potato variety research,” Debons said. “I will miss him. He has a wicked sense of humor that not everyone saw.”

Stark was reluctant to project what the future might hold for potato research and development, recalling someone working for a local processor in Shelley in 1981 predicted that they wouldn’t be growing potatoes in eastern Idaho in five to ten years because of the distance to market.

“I learned early on that trying to make predictions on the potato industry is probably a fool’s errand,” he said.

Stark said it was the teamwork and collaboration among researchers and industry specialists throughout his career that he will never forget.

“I enjoy working with people who enjoy working in team efforts,” he said. “Because what I’ve observed in my career is that really anything worthwhile that lasts a long time and has a major impact is not the result of one person’s efforts, it’s the result of a lot of people working on a particular goal. I think when we’ve been successful in reaching a team goal those have been the times that I’ve enjoyed the most.”

Stark said the success that he and the tri-state breeding program have enjoyed could not have been accomplished without the collaboration of everyone in the potato industry, from seed growers to commercial growers to packers.

“I’ll also add that the industry collaborators that we’ve had have been key to any success that we’ve had,” Stark said. “You have to have industry collaborators to make these things work or you’re going to have a train wreck and so I’ve appreciated those growers and members of the processing and fresh pack industry that have been proactive enough to work with us and to try these things.”