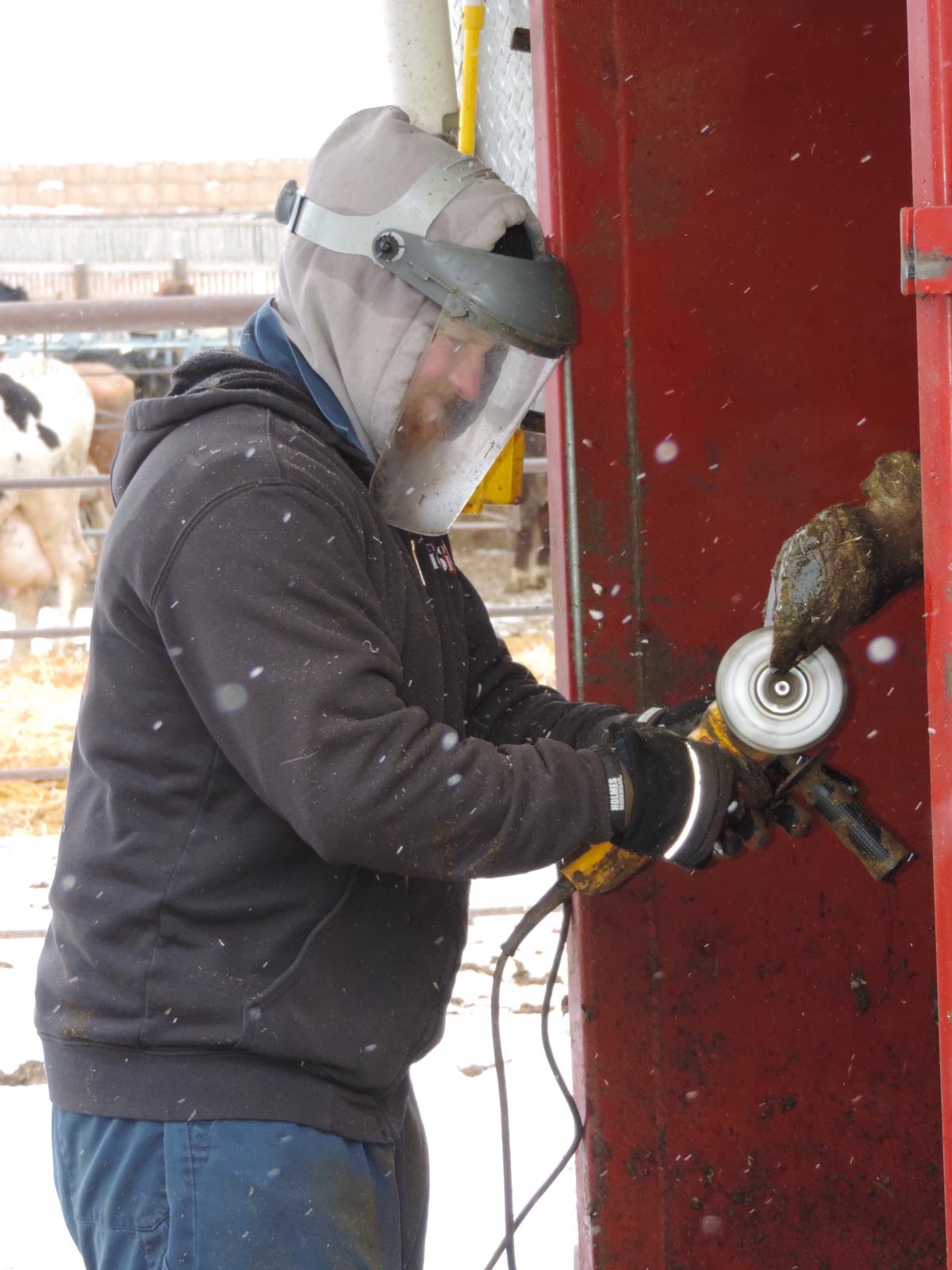 Behind a glass of milk, slice of cheese, or bowl of ice cream is a dirty job at a dairy that few people know exists. To keep cows putting their best foot forward, healthy, and at peak production, they need their hooves trimmed twice a year.

Drew Peterson, 28, a cow hoof trimmer based in Rupert, has been giving bovine pedicures for five years. While guiding an electric grinder to level a cow’s hooves, shavings fly through the air and ping off his protective plastic facial shield.

“It was funny to watch Mike trimming a cow,” Peterson said. “When I tell people what I do, they usually say, ‘I didn’t even know that was a job.’ Most people know horses need a farrier to trim their hooves but don’t think about cows needing it, too.”

Peterson’s assistant, Ryan Matthews, said sometimes people laugh when he tells them his occupation. “I get a look like, ‘What’s that? You give cows a pedicure? Why?’”

Cow hoof trimmers get the last laugh with permanent job security. Peterson and Matthews are in high demand five to six days a week at dairies throughout southeastern Idaho. Dairy owners understand the importance of their job.

“Cows need their hooves trimmed at least twice a year,” Peterson said, estimating hooves grow about two inches annually. “If their feet hurt, their milk production drops because they don’t feel like eating or drinking.”

Peterson keeps cows’ hooves level so their weight is evenly distributed and they are comfortable.

“At dairies, the cows aren’t on pasture, so their hooves aren’t naturally worn down,” he said. “The hooves tend to grow long at the toe and stay short at the heel. We keep them balanced and sound.”

Peterson began trimming hooves in 2016 when he bought the business from a friend who moved to New York to work at a dairy.

“He wanted his clients to still have a hoof trimmer,” Peterson said. “I did an internship with him to see if I’d like the job and did. I’ve always liked working outside.”

Peterson estimates there are about a half dozen cow hoof trimmers throughout southeastern Idaho. They stay busy and are essential to the state’s dairy industry.

Hoof trimmers like Peterson help keep Idaho’s 600,000 cows at 450 dairies at peak productivity. Idaho’s cows produce more than 40 million pounds of milk per day or 15 billion pounds per year, according to the National Agricultural Statistics Service.

Peterson points out how the dairy industry is a crucial cog of Idaho’s economy.

Dairy is Idaho’s most valuable farm commodity in terms of farm cash receipts – the money that farmers receive from buyers of their commodity. Idaho’s milk receipts totaled $2.85 billion for 2019, the most recent year statistics were compiled, according to the USDA’s Economic Research Service.

Peterson and Matthews work quickly as a team, trimming about 80 to 100 cows a day. Matthews guides each cow into a secure chute atop a hydraulic table. With the cow strapped in place, the table rises to waist-level, so Peterson can stand and work comfortably.

Using straps, Matthews secures and lifts one leg at a time. Peterson follows him, grinding each hoof. In about five minutes, a cow’s hooves are trimmed.

“If she has an infection or lameness issue, it takes a little longer,” Peterson said.

To take care of an occasional abscess or wart, Peterson cuts away the damaged hoof, applies disinfectant, and wraps it.

“We do our best to avoid lameness at the farms we service,” Peterson said. “In order to do that we need to work alongside farmers, nutritionists, and veterinarians to keep the cows as healthy as possible.

“It’s definitely a dirty job, but it’s satisfying because you have a sense of accomplishment at the end of the day. The dairy owners are really appreciative and treat us well, too.”