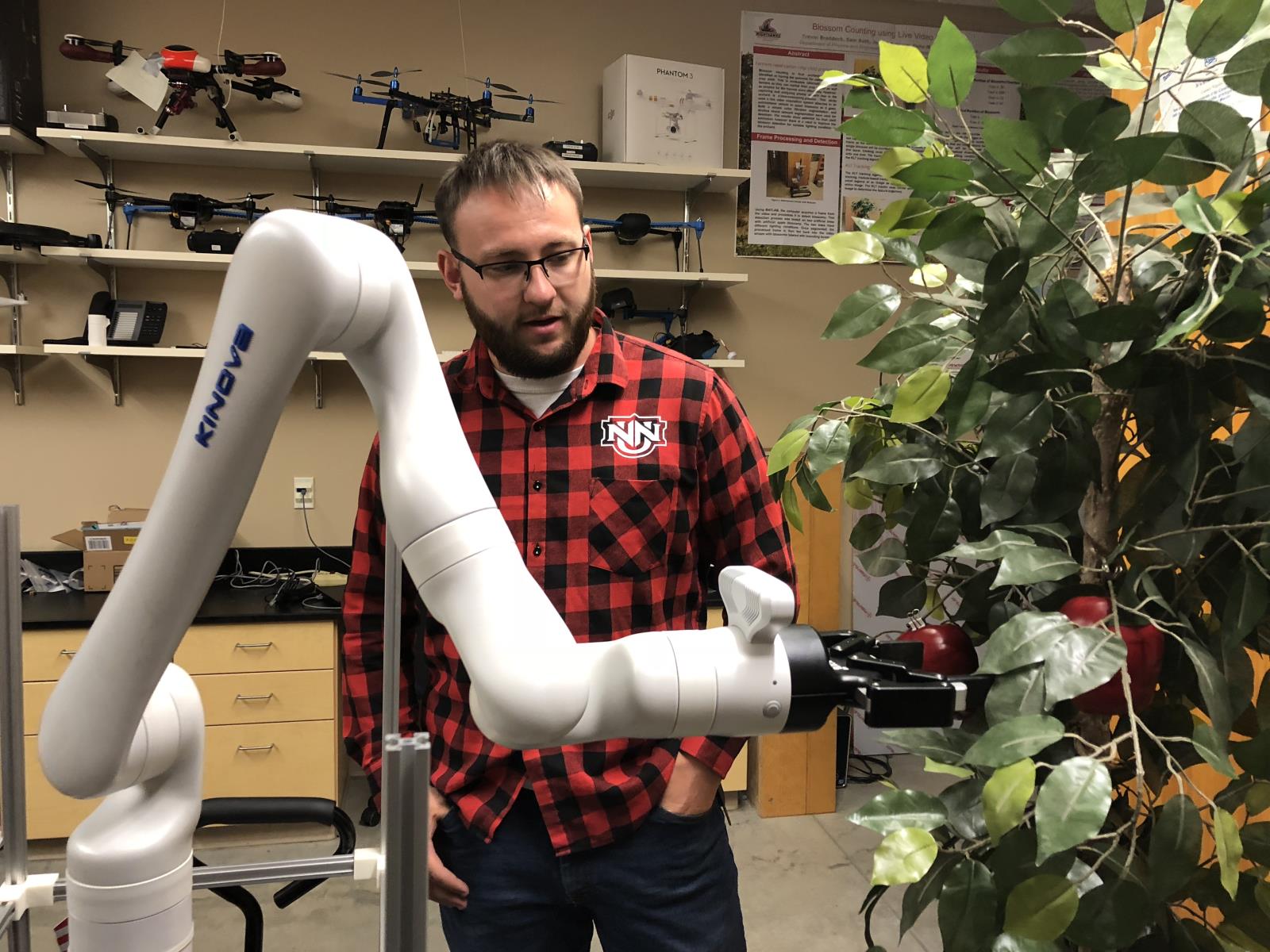 NAMPA – A university professor in Nampa, with the help of his engineering students, is developing a fruit harvesting robot prototype for Idaho orchardists.

Duke Bulanon, an engineering professor at Northwest Nazarene University, received a $132,000 specialty crop grant from the Idaho State Department of Agriculture for the project.

The goal of the project is to develop an orchard robot (OrBot) that can be programmed to assist with harvesting fruit.

Bulanon said one of the biggest challenges fruit growers, as well as other farmers in Idaho and around the U.S., face right now is a lack of available labor, especially during the narrow harvest season.

“The development of a robotic harvesting system could help meet this need,” he said.

He said OrBot is being developed with the thought of supplementing rather than replacing human labor.

“This will help in terms of providing another labor source for our farmers,” he said.

The system will pick fruit slower than a human, “but it can run all day and throughout the night,” said Marina DeVlieg, an NNU engineering student assisting Bulanon on the project. “That can really help make up for the lack of labor because it doesn’t need a break and it can work on its own.”

OrBot will consist of a machine vision system, a robotic arm, a gripper and a control system. Bulanon and the engineering students helping him develop the orchard robot recently gave Idaho Farm Bureau Federation employees a demonstration of the robotic harvesting system.

During the May 6 demonstration in an NNU lab, OrBot picked plastic red apples from a plastic apple tree.

The platform uses a machine vision system with a unique combination of a color camera and a depth sensor that is used to recognize and locate fruit on a tree. Once OrBot locates the fruit, a control system directs the robotic arm toward the fruit and the gripper picks the fruit from the tree and drops it in a box.

It keeps picking until there is no more fruit left on the tree.

After the robotic arm drops the apple in the box, “then it will come back to its home position and do it again,” said NNU engineering student Colton Burr. “Then, when there are no more apples, it stops running.”

Bulanon will test OrBot in a live situation during the 2021 harvest season at two of Idaho’s largest commercial orchards in the Sunny Slope area near Caldwell.

The robotic harvest system will be used to pick apples at Symms Fruit Ranch and to pick peaches at Williamson Orchards. Managers of both orchards said they are excited to see how it performs and they view it as a way to assist and not replace hand labor crews.

“This could really help us during harvest time,” said Williamson Orchards Manager Michael Williamson. “I don’t see us getting away from needing folks to do hand labor but I do envision it as being a way to supplement our hand crews.”

“I look at it as a supplement,” he said. “Anything that would help out with our labor situation would be a benefit. It is an exciting project.”

The OrBot system is an extension of previous agricultural research projects that Bulanon has received ISDA specialty crop grants for.

Bulanon and his engineering students previously received a grant to use artificial intelligence to teach a deep learning algorithm how to recognize fruit and the results of that project are being incorporated into the OrBot system.

He also previously received a grant to develop a system called IdaBot, a simple utility robot that can navigate an orchard or vineyard autonomously. The IdaBot technology is what will be used to guide OrBot around an orchard.

The OrBot project is the fifth project that Bulanon and his team of engineering students has received specialty crop grant funding for.

He has also tested his previous research at commercial orchards and Williamson said he is always happy to have the potential new technology tested at his operation.

“We’ve always enjoyed participating with university researchers,” he said. “It’s exciting to learn about cutting edge technology that could be coming through so we can be ready to adopt it if and when it comes to fruition.”