COVID-19 has had major impact on seed potato growers 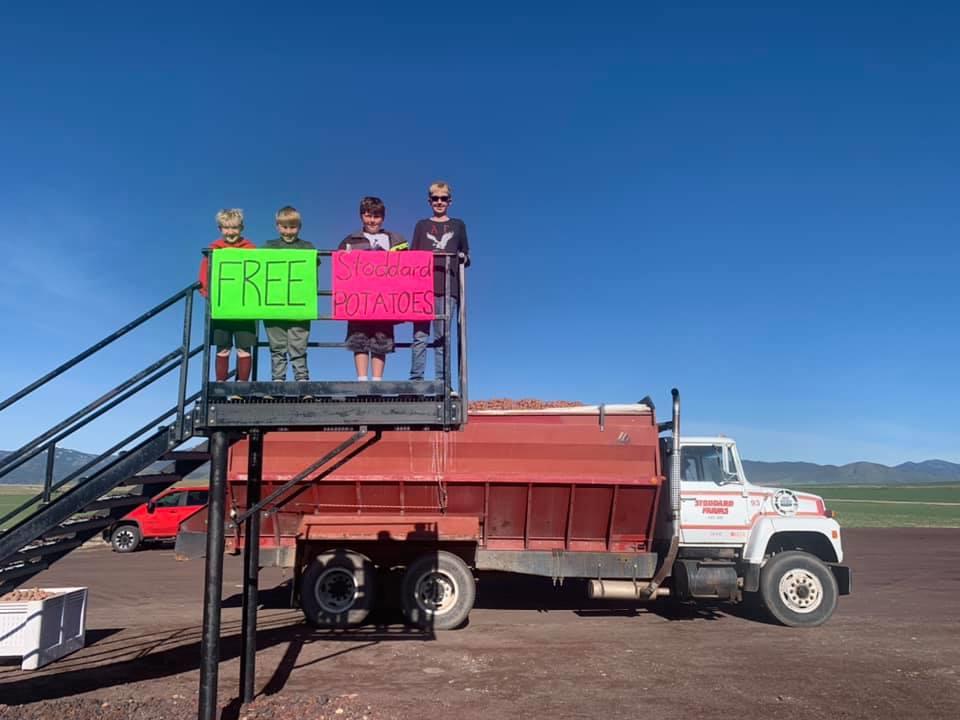 Caribou County farmer Jason Stoddard is one of many Eastern Idaho seed potato growers who have been stuck with lots of spuds that will never be planted due to the COVID-19 crisis.

Commercial potato farmers throughout the state have canceled seed orders, having had their contracts with processors scaled back due to lost food service demand amid the pandemic.

Based on the uncertainty about the future, many Idaho seed growers are also planting fewer acres this spring of seed that will be delivered next year.

Stoddard managed to sell some of his excess inventory to area potato dehydration plants.

"A fair amount of ours had been shipped out by the time the real crux of this hit," said Stoddard, who has been involved in several conference calls pertaining to the issue as a member of the National Potato Council's board of directors.

But his family's best option to move much of the surplus has been to give it away.

Over the course of a few recent days, Stoddard family children held up signs inviting passing motorists to claim their fill of red seed potatoes, which many dehydration plants won't take.

The family also posted word of the giveaway on Facebook, offering instructions about protocols to maintain social distancing and asking people to bring their own bags and boxes.

"We will resupply totes through the day if demand warrants. We have plenty of potatoes to give away," the Facebook post stated.

Stoddard said interest in the free spuds was strong, and the public was extremely grateful. The family initially planned to do a one-day giveaway on May 14 but ultimately offered spuds for three consecutive days.

On May 20, his staff also prepped 80 15-pound bags of red potatoes to take to the Soda Springs food bank.

"We honestly didn't know whether people would be interested," Stoddard said, emphasizing that seed is especially costly to grow as it requires additional inputs and its own certification process. "It's kind of a tough thing all around, but there is some good that comes out of it."

His family will undoubtedly plant fewer acres of seed potatoes than originally planned this spring, he said.

"A lot of these commercial (potato growers), they're looking at this harvest this fall. As a seed guy, we don't make deliveries until probably 10 months from now, in the spring of 2021," Gilbert said. "A lot of guys I've talked to have said, 'We hope things are back to normal,' but that's about the best they can do for me."

Gilbert was fortunate that the bulk of his seed was delivered to growers in Washington, most of whom had already planted when the processors announced their cuts.

United Seed Potato Growers of Idaho has had a contract for the past eight years to sell spuds to dehydrators. In the past, the contract has helped member growers find a home for off-sized seed potatoes.

Prior to the COVID-19 crisis, the market for spuds was tight. In light of the pandemic, however, that contract has been a big help for many members.

"(Seed growers) are really concerned about the lack of demand created by the COVID-19 pandemic on potatoes in general. It's kind of like, what do I do? Plant the same acres as the year before, expecting the economy to rebound?" Shawver said. "It's difficult for seed growers to figure out."

This spring, Ashton seed potato grower Clen Atchley has cut about 25% from his acreage of the popular processing variety Ranger Russet, due to the pandemic.

"It's kind of tough for anybody to anticipate what the demand is going to be," Atchley said. "We make the assumption that if somebody doesn't take the seed they were going to want this year, they probably will not take it next year as well."

Atchley has heard stories of seed growers who have had as much as a third of their crop returned.

He was fortunate to sell his surplus seed — about 20 percent of his crop — for dehydration. Nonetheless, he estimates he's taken a $400,000 to $500,000 financial hit on those spuds, compared with the price of seed.

On the commercial side, Travis Blacker, industry relations director with the Idaho Potato Commission, explained his organization has taken several steps already to address the oversupply on the market.

During April and May, the IPC hosted a jumbo bin promotion, moving large-sized spuds that would normally go to the food service sector through retail channels.

When restaurants began closing their dining areas, Blacker explained, there was a full supply chain of Idaho potato cartons in trucks on the road and at distributors, but retailers were running out of inventories to sell to households quarantining at home.

IPC helped move those food service cartons directly onto retail floors, simply taking off the tops of the boxes and selling them loose.

Blacker considers it a given that the Idaho potato crop will be well below 300,000 acres this season, and he expects both fresh and processed potato growers will cut back on their acres.

"These seed potato growers, they're kind of the forgotten bunch," Blacker said. "They're going to be hurt pretty good."