“After order and liberty, economy is one of the highest essentials of a free government.”
-President Calvin Coolidge 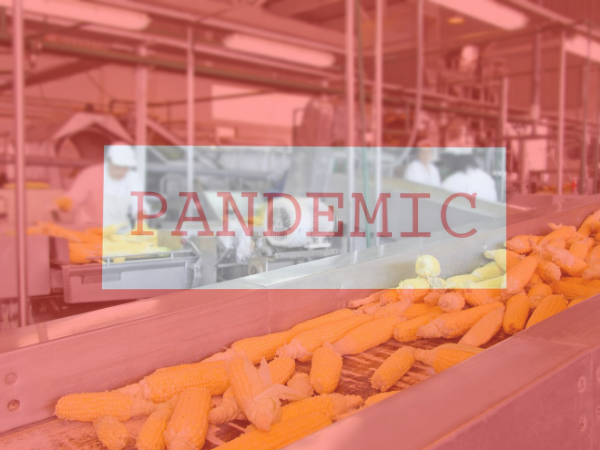 BOISE - All aspects of agriculture and food production have been rightly deemed essential as our population needs a constantly produced and available food supply. To accomplish this, farms and ranches, as well as food production and processing facilities must have employees continuing to show up to do the necessary work, thus posing an additional challenge for employers during a pandemic.

Social distancing, limiting group sizes, and good ventilation are usually not a concern out in the field, or on the range. However, as crops and products are harvested and brought into enclosed facilities for sorting, packaging, processing, and/or shipping, the ability to implement all recommended standards becomes much more limited. Agricultural employers have attempted to respond to this unusual situation and have tried to do their best to implement policies and procedures to protect and safeguard employees. It would be impossible for employers to have complete control over every factor or situation that may contribute to the spread of the virus, especially outside of work hours.

One of our members recently shared with us the extensive new measures they have implemented in their packing facility to provide, to the best of their ability, a safe work environment for their employees under the circumstances. They have utilized the guidance materials provided by both federal and state agencies to implement policies and procedures to limit disease transmission and reduce employee risk. Notwithstanding this extensive good-faith effort, this employer continues to receive mixed messages from state agencies regarding their potential liability for disease transmission. It has been our members’ experience that there is no certainty on this topic under current state law.

Furthermore, employers cannot control nor limit their employees’ activities when they are not at work, and there is no possible way to pinpoint whether an employee was exposed to the virus at work or off the job. When a virus has achieved community-wide spread, it makes no sense for employers to be singled out as the entity responsible and/or liable for keeping the employee safe from that virus. Yet that is what some employees are asserting.  Fortunately, rather than waiting for employee lawsuits, the Governor and Legislature determined that something should be done to protect employers from this legal uncertainty so our economy can continue to move forward. 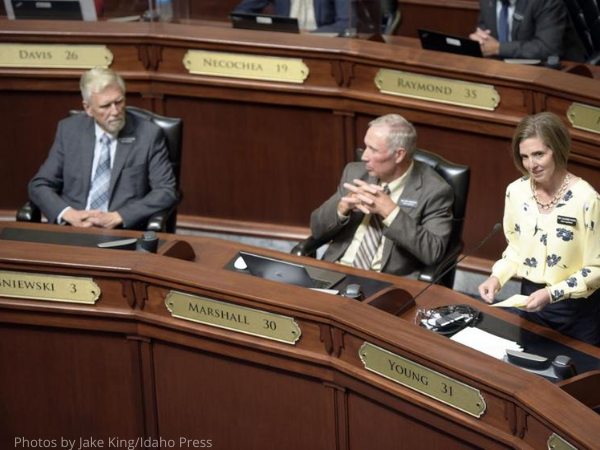 After reviewing five different bills that proposed to address this situation, and after hearing lengthy testimony from the public, the House Judiciary and Rules Committee settled on HB6 as the most appropriate path forward.  HB6 was sent to the House floor where it passed on a vote of 54-15.  It then moved to the senate where it easily passed out of committee and was approved by the full Senate 27-7.  Governor Little signed HB6 the next day and it is now fully in effect.

The bill itself is only just over one-page long.   Here is a link to the text of the bill:  HB6

1. Protection from liability for all claims of exposure and transmission of coronavirus except those involving intentional, willful or reckless misconduct.  In other words, unless someone intentionally attempts to infect someone with COVID, they are not liable for protecting anyone else from it.

2. This liability protection does not require a declaration of emergency by the Governor.  It is effective at all times, under all circumstances.

3. This liability protection does not require the employer to implement any particular preventative measures.  The only limitation is they cannot intentionally or willfully expose or infect someone.

4. This protection only lasts until 7/1/21.  Many legislators wanted more time to consider the topic than a special session typically allows, so they included a sunset and fully intend on discussing this again during the regular session.  The protections may be tweaked a bit, but we anticipate that the liability protection against COVID transmission will be made permanent in substantially the same form in the next session.

Elections During the COVID Pandemic 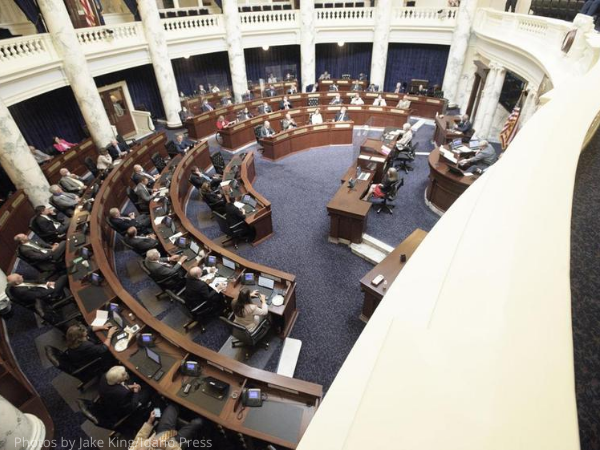 BOISE - Two bills and one House resolution dealing with elections during the COVID pandemic made it through the legislature during the special session held last week. H1 amended current Idaho code to add wording ensuring that voters always have the option of in-person voting provided to them, regardless of any declared state of emergency, extreme emergency, or disaster emergency.  This bill passed out of the House unanimously and passed out of the Senate with only two votes against. Governor Little has signed the bill into law.

HR1 is a resolution adopted by the House addressing the Governor on the topic of poll workers. To help solve the issue of an insufficient number of poll workers, it is suggested to use money from the CARES Act to fund advertisement, training and provide monetary incentives to poll workers to ensure enough turnout. It also suggests that if there are not enough poll workers volunteering, the Governor should activate the National Guard to act as election poll workers across the state of Idaho.

One other bill that was taken up by the legislature dealing with elections was S1002. This bill passed the Senate but died in House State Affairs committee. If passed this bill would have created “voting centers” where registered voters from any precinct in that county could have cast their ballots during the November election. This was meant to address issues of having fewer poll workers and the difficulty of finding enough suitable polling places that could accommodate social distancing requirements. The arguments against the bill on the House side was that it is creating too much disruption and would make it harder for voters to know what is going on. Many representatives argued that it does not provide predictability and only creates more fluctuation for voters to try and follow with this election. There were also comments over the concern that we would be worsening the chance to spread coronavirus if you have voting centers that could each see 3,000 voters going into them versus the usual smaller capacity polling locations. It was a 10 to 5 vote to hold it in committee, killing this bill. 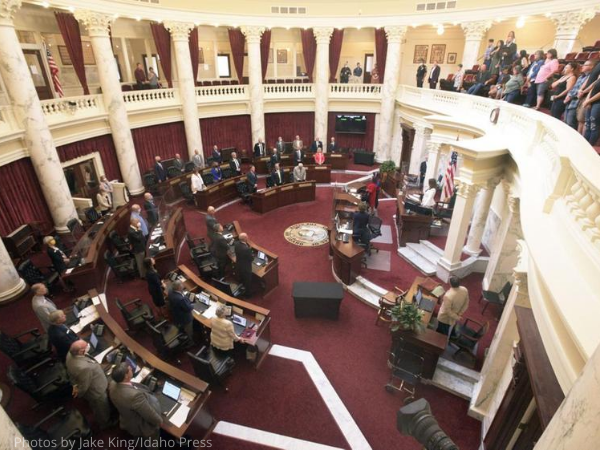 HCR101, if passed by both chambers, would have effectively ended the Governor’s COVID-19 emergency order. The resolution pointed to Idaho Code 46-1008, which gives the legislature authority to end an emergency declaration at any time by passage of a concurrent resolution. Proponents of the effort stated their reasons as to why the emergency order should be ended, while opponents pointed to the state constitution as to why it may be inappropriate for the legislature to even take up the issue during the special session.

After a lengthy floor debate, the House passed the concurrent resolution on a 48-20-2 vote and sent it to the Senate for consideration. Ultimately, the Senate chose not to take up the resolution, and instead passed SR101.

Senate Pro Tem, Brent Hill (R-Rexburg) presented the senate resolution and stated that it was the work of many individuals. SR101 recognizes the authority stated in Idaho Code 46-1008, but then outlined the constitutional provision which limits the topics the legislature can discuss during a special session to only those specified in the Governor’s proclamation. It was the determination of the Senate that taking up the issue of the declared COVID-19 emergency was outside of the legislature’s authority to handle during this special session.

Nonetheless, the Senate did call for the Governor to end the emergency order but added the stipulation to do so in a manner that would not jeopardize federal resources that would benefit health care institutions. Other than the constitutional question, this was one of the major concerns raised by opponents to ending the declared emergency.

Additionally, SR101 outlined eight items the Senate would like to see addressed in the upcoming regular session of the legislature. Those items as stated in the resolution are as follows:

1. A declaration that all Idahoans who work, provide for families, pay taxes, and otherwise contribute to the Idaho economy must be deemed essential in any declared emergency;

2. An amendment to the Idaho Constitution providing that, in limited circumstances, the Idaho Legislature may call itself back into session while remaining a part-time, citizen Legislature;

3. A limitation on the length of any emergency declaration of the Governor without the concurrence of the Legislature;

4. A limitation on the emergency powers and spending authority of the executive branch without the approval of the Legislature;

5. A prohibition on quarantining healthy individuals;

6. The ending of orders prohibiting Idahoans from attending places of worship;

8. A review of the authority of the public health districts and local government subdivisions.

Farm Bureau supports the legislature addressing these topics and will work together to ensure reasonable solutions are achieved for the benefit of all.