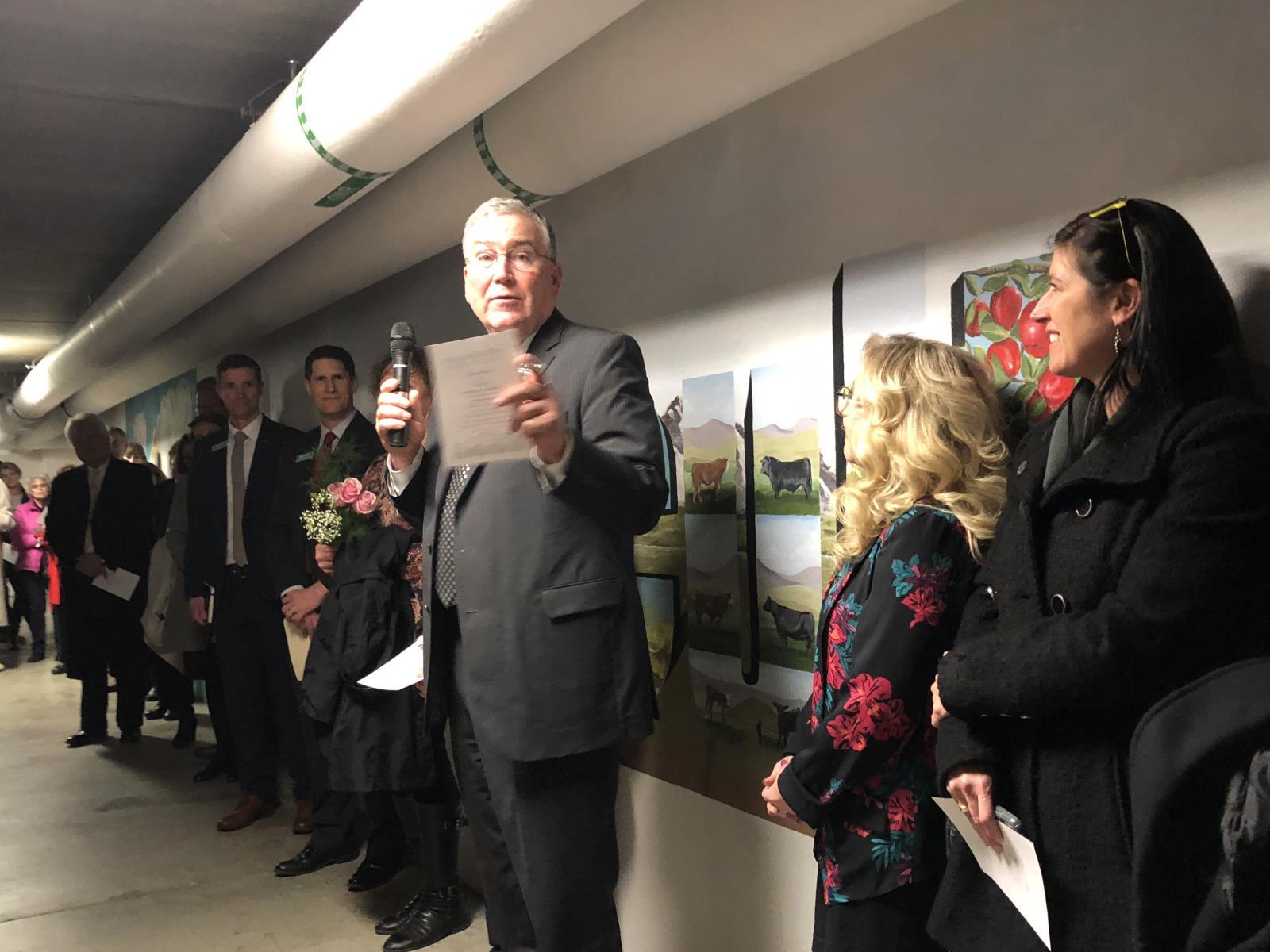 BOISE – Dozens of representatives of Idaho’s farming and ranching industry were on hand Feb. 17 to witness the official dedication of an agriculture-themed mural in the state’s Capitol building.

“This is something we can all be proud of; it’s so well done,” Speaker of the House Scott Bedke said about the 35-foot mural. “On behalf of a grateful state, we accept the mural and we are completely enthused about it.”

The mural was painted on a wall in an underground tunnel beneath the Idaho State Capitol building. The tunnel, which connects the Capitol to nearby government buildings, is used by hundreds of lawmakers and state employees.

The A in the mural contains Russet potatoes, the farm commodity Idaho is world-famous for. The G contains wheat fields, the R dairy cattle, the I onions and the C has trout.

The mural was painted by Parma High School art teacher Linda McMillin, who began painting it last January and competed the project in mid-April.

She told Farm Bureau last year that she has painted a lot of murals in her lifetime but this project was special to her.

“This is the best work I’ve ever done,” said McMillin, who grew up on a farm in Illinois. “I’m trying to show the beauty of all the different agriculture that is here in Idaho. I’m trying to present it in its best form.”

The crops and livestock featured in the mural are just a small sampling of the 186 farm commodities produced in Idaho, said Rick Waitley, state director of Idaho Ag in the Classroom, which commissioned the $8,000 project.

He said people should not read too much into which commodities were or weren’t included in the mural. The important thing, he said, it that it is a reminder of the important role the agricultural industry continues to play in Idaho.

“We are so pleased with what this is,” Waitley said during the mural dedication. “Every day, literally hundreds and hundreds of people pass through this tunnel and we think it’s a real tribute to the state of Idaho. Linda, you did a wonderful job.”

Although Idaho Ag in the Classroom began and coordinated the project, several ag-related groups and businesses helped support it financially, including Idaho Far Bureau Federation.

“Idaho Farm Bureau was more than happy to help support this project,” said IFBF President Bryan Searle, a farmer from Shelley. “It’s a beautiful reminder to everyone who passes through that tunnel that agriculture continues to play a critical role in the state’s economy and culture.”

The half-mile-long tunnel is dotted with some other murals, most of them decades old and badly faded.

During the mural dedication, Bedke and Waitley challenged other agriculture and natural resource organizations to help fund more murals celebrating their industries throughout the tunnel.

Bedke, a rancher, pledged to contribute $1,000 toward the next mural and he asked others in the hallway “to join with me in pushing this.”

“I would challenge all of you in this hallway now to not let this … be the last (mural),” he said. “We’re all proud of our state, we’re all proud of the agricultural roots that we have here and let’s not let it stop here.”

He said a hallway full of modern murals “ought to be one of the stops on the tours of the Capitol … The trout industry ought to have a five or six foot mural, ditto onions, ditto dairy, ditto beef, ditto on down through the list.”