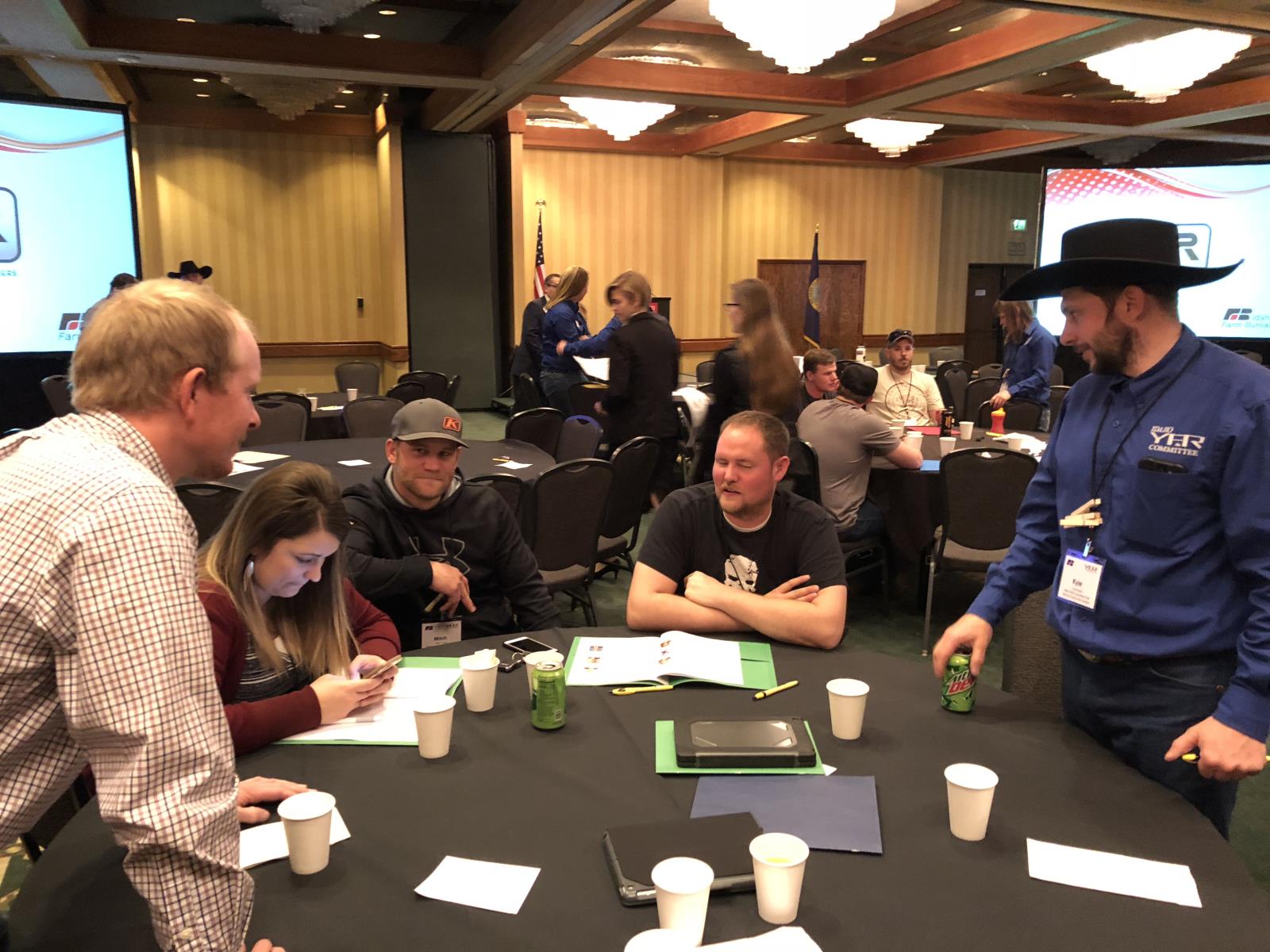 But YF&R members say it’s the networking opportunities that are the biggest benefit of the program, which is open to any farmer or rancher in Idaho between the ages of 18 and 35.

During the annual IFBF Young Farmers and Ranchers Leadership Conference in Boise Jan. 30-Feb. 1 – the conference was attended by 180 farmers and ranchers – the benefits of networking with other emerging producers was a major topic of discussion.

It’s nice to rub shoulders and become friends with other young farmers but the biggest benefit in networking with them is being able to tap their brains for answers and vice versa, said Mitchel Searle, a Burley farmer.

“I find myself calling those individuals saying, hey, can you tell me how you deal with this aspect on your farm?” said Searle.

Searle said that while sitting around the table during lunch or breaks, he’s constantly asking questions of other producers: “How do you operate your business, what’s your crop rotation like, how many hours to you run your tractors before you trade them in?”

“You feel like you’re alone in the world sometimes,” he added. “But you’re not alone. When you come together at events like this, you realize, there are a lot of other young farmers out there scrapping, trying to make it work, and you can learn from them and you’re encouraged by the fact that you’re not the only one.”

Paige Nelson, who operates a cow-calf operation with her husband in Rigby, offered a practical example of how networking helped her business.

“We needed hay (last) year and I procrastinated buying that hay until September,” she said. She turned to a fellow YF&R member in her area who grows hay. “I call him up and tell him I need 20 tons of hay by next week, can you get it to me, and he delivered it.”

“That’s the type of networking we’re talking about,” Nelson said. “It’s nice to run shoulders with people but when it comes down to true networking, that means you have friends you can call on when you need help or you need something.”

“The networking thing is kind of special because you find out that people are in the same trenches that you are,” said Franklin County rancher Jason Fellows, the state YF&R chairman. “You learn that other people are going through the same challenged and struggles we are as beginning farmers.”

While networking is a major benefit of the program, the true goal is to help produce the industry’s future leaders and assist them grow personally and professionally, Fellows said.

The YF&R program has a slogan called PLAN, which stands for: Personal growth, leadership development, advocacy and networking.

“We feel those four things give us a great platform for people to be able to plan for success,” Fellows said. “IT doesn’t matter where you are in life – if you’re an agriculturalist who is producing a commodity or whether you’re a lobbyist for agriculture – that gives you a pretty good plan for success.”

“The ultimate goal of the YF&R program is to be able to help young producers develop skills that are going to benefit them in their life and their operation,” said Brody Miller, an IFBF regional field manager who oversees the program and is a former member himself.

“We try to encourage these young people to get involved and give them the skill sets they need to be able to feel like they are a competent leader so they can get involved, make a difference and be a voice for agriculture moving forward,” Miller said.

He said one of the biggest benefits of being a YF&R member is that you get to be involved in shaping the industry’s path.

“If we don’t get involved, we’re leaving it in somebody else’s hands to make the decisions for the future of agriculture and we can’t afford to do that,” Miller said.

Many members of Idaho Farm Bureau Federation’s board of directors went through the YF&R program, said IFBF President Bryan Searle, a farmer from Shelley.

“In order for Farm Bureau to stay strong, relevant and viable, we have to continue to train that next generation,” he said. “We have got young farmers and ranchers that are brilliant and we need to help train them, support them in agriculture and provide them the experiences they need to be leaders into the future.”

Searle joined the program after a cousin invited him to a YF&R conference and he says the program is a big reason he “developed such a deep love for Farm Bureau. It’s in my blood.”

IFBF’s YF&R program includes more than 250 farmers and ranchers from across Idaho that represent most of the farm commodities produced in Idaho. The reasons that members have joined the program are varied.

Fellows got involved with YF&R after being asked to give a prayer blessing the food during a Discussion Meet, which is a YF&R contest designed to help young producers hone their public speaking and problem-solving skills during a competition that simulates a committee meeting.

Nelson was lured to the group because she wanted to win the Discussion Meet and win a four-wheeler.

“My initial engagement with Farm Bureau was totally superficial but as I’ve continued to progress through the program, I’ve realized it’s so much more,” she said. “I’ve seen myself grow as a person and I’ve been given leadership and traveling opportunities.”

Others have joined as a way to try to win the group’s Excellence in Agriculture or Achiever in Agriculture awards, which both have four-wheelers as the top prize.

“You have people that are very competitive that will get involved with the program some of the competitive events,” Searle said. “There are others that wouldn’t touch those events with a 10-foot pole and that’s all right. The program is well rounded and there are a lot of opportunities for everyone.”

Two new YF&R programs that will begin soon include a mentorship program and one for people interested in governmental affairs.

“There are programs outside of just competitions that can benefit all young producers,” Miller said.

During the annual YF&R leadership conference, the agenda includes a trip to the Idaho Capitol building to attend committee meetings and rub shoulders with lawmakers.

During this year’s conference, participants met with the governor for 45 minutes and attended the House and Senate agricultural affairs committees. They were well received.

“These young people … are the consummate stewards of our natural resources in the state of Idaho,” Rep. Jerald Raymond, a Republican rancher from Menan who formerly served as the state chairman of the YF&R group, said during a House Agricultural Affairs Committee meeting.

“We appreciate you being here today and we appreciate everything you do for agriculture,” said Rep. Judy Boyle, a Republican rancher from Midvale and chairwoman of the House ag committee.