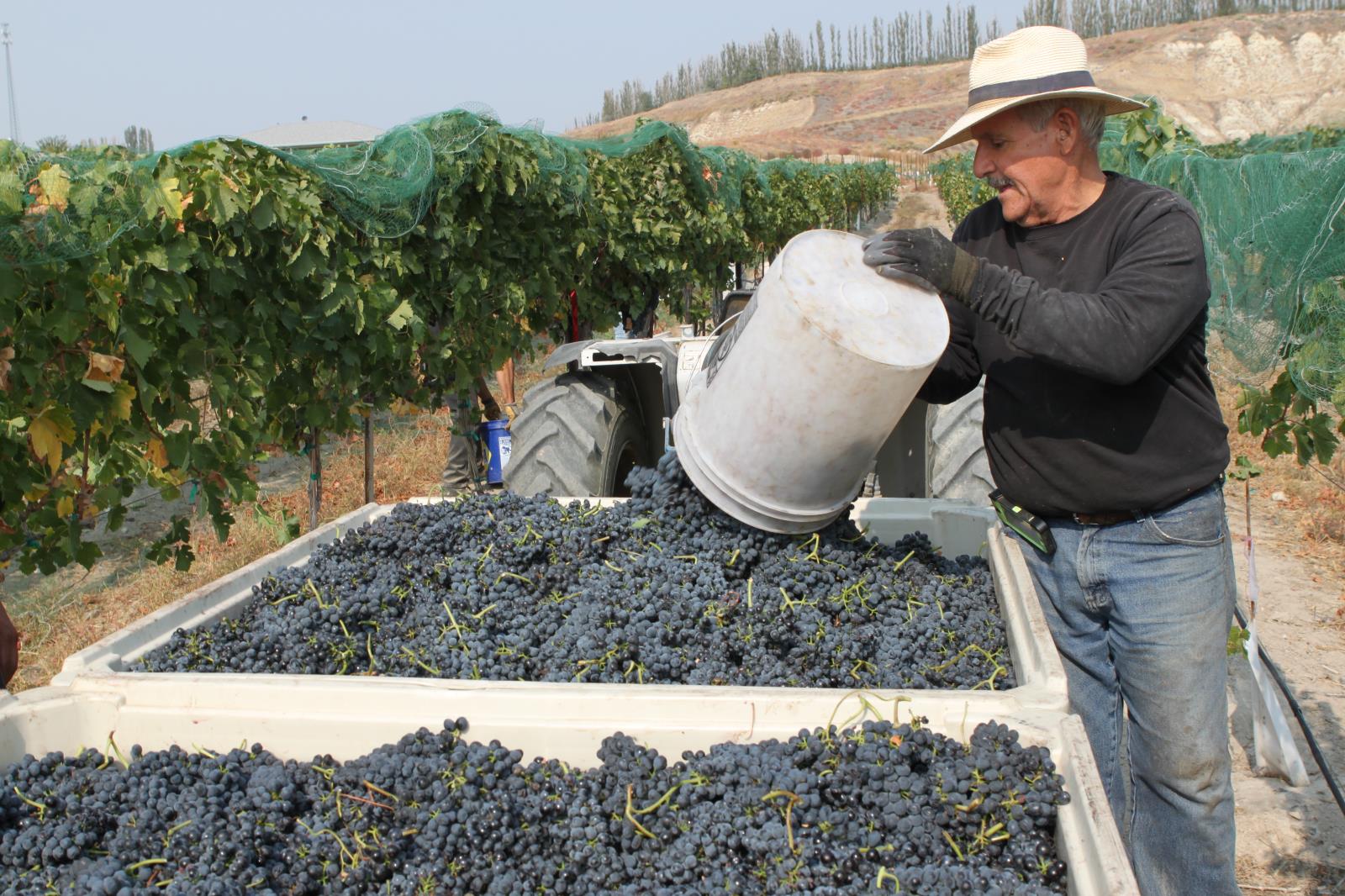 CALDWELL – With Idaho’s wine grape harvest well under way, yields are about average this year and maybe even down a bit, but quality looks great, according to vintners and vineyard owners.

“It looks awesome. I’ve been hearing good comments on quality,” said Dale Jeffers, manager of Idaho’s largest vineyard, Skyline Vineyards near Nampa. “I think across the board, yields are probably about average. Some varieties are up, some varieties are down.”

“Everybody we’ve talked to is saying they are seeing slightly reduced crop yields,” said Martin Fujishin, owner of Fujishin Family Cellars in Caldwell in the heart of Idaho wine country. “But overall, (quality) looks pretty good.”

Things are looking pretty good at Williamson Orchards and Vineyards in the Sunny Slope area near Caldwell in southwestern Idaho, where most of the state’s wine grapes are grown, said manager Mike Williamson.

“We are hitting most of our estimates and targets for time of production,” he said. “I’m pretty happy with how it’s going.”

Ron Bitner, owner of Bitner Vineyards in Caldwell, said his vineyard typically yields between two and three tons of wine grapes per acre.

“This year we’ll be closer to two tons,” he said. “Yields are average for me but the flavors look good. For Bitner Vineyards, it looks like an average to good year.”

Idaho’s 1,300 acres of vineyards and 60 wineries produce about 160,000 six-bottle cases of wine per year. According to a recent economic impact study sponsored by the Idaho Wine Commission, the state’s wine industry has a $210 million economic impact on the state.

“Smoke can have an impact on the grapes when you’re closest to the fire, like they were in California or Washington,” Williamson said. “But we got less smoke and I think the smoke that we got in our region was at levels that are not going to negatively affect the wine grape quality.”

What did have an impact on the state’s wine industry was the COVID-19 outbreak.

Fujishin said Idaho’s wine industry is driven primarily by the local market, meaning the nearby Boise metropolitan area, where the bulk of the state’s population lives.

“We were very fortunate in that the local wine clientele still supported us very strongly through the pandemic,” he said. “But with that being said, we definitely saw a big drop in tourism and the wholesale side of our business.”

Williamson said his business saw a drop in retail sales during the first few months of the COVID-related shutdowns.

“Just like every retail business out there, we had to be nimble in our response to how we do retail because the situation was changing rapidly, like every two weeks or so,” he said.

Although sales have been picking up in recent months, Williamson said, “It has impacted us for sure. It was a pretty bad couple of months.”

Bitner said income from his wine business is down about 25 percent due to the response to the coronavirus outbreak but he also said he has some loyal clientele from the region that have helped him weather the storm.

“Our loyal clientele has gotten us through this,” he said.

The response to the COVID outbreak has also caused wineries and vineyards to alter how they conduct business.

There has been a big emphasis on doing whatever is possible to prevent an outbreak among farm workers because that’s the last thing the wine grape industry needs, Fujishin said.

“It’s such a small industry, we can’t afford to be short anybody,” he said. “So it’s made us take those restrictions very seriously and really try to be as cautious as we can be going forward. All of us in the industry are pretty conscious of keeping everybody safe.”

At Skyline Vineyards, Jeffers said, one of the big COVID-related changes was doing away with a biometric time clock to prevent so many people from touching the same surface. Skyline is now keeping track of hours manually.

“We did what we could to try to keep people safe,” Jeffers said.

The good news during the pandemic, Fujishin said, is that wine grapes don’t give a lick about COVID and they look great this year.

“The grapes don’t care if it’s a pandemic or not,” he said. “They are just going to keep on doing what grapes do.”