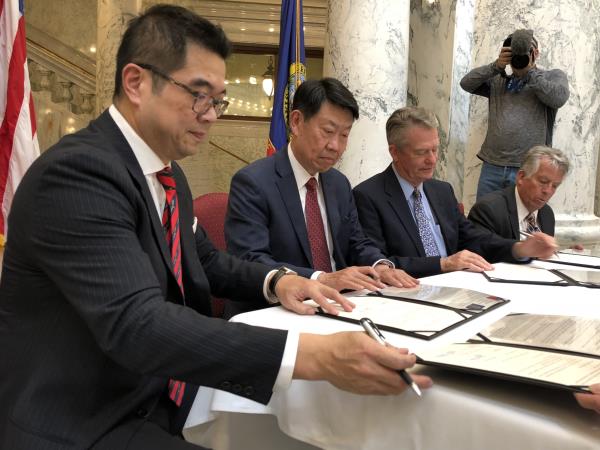 BOISE – Representatives of the Taiwan Flour Mills Association on Sept. 24 signed a letter of intent with the Idaho Wheat Commission to purchase 66.1 million bushels of U.S. wheat in 2020 and 2021.

The deal is valued at about $576 million.

A trade delegation from Taiwan was joined at the ceremonial signing event in the state Capitol building by Gov. Brad Little, four members of the Idaho Wheat Commission and other representatives of the state’s grain industry.

A good portion of those wheat purchases from the TFMA will come from Idaho and Taiwanese trade delegation members said the state’s farmers consistently grow a quality crop.

“The Taiwan flour millers choose Idaho wheat because of the high quality we produce and the identity preservation of the wheat available from our state,” said IWC Chairman Ned Moon.

IWC Executive Director Blaine Jacobson said 5 percent of Idaho wheat, or about 5 million bushels, is sold annually to the TFMA and about 200 Idaho farms are in business because of Taiwan’s annual purchases of wheat.

“Thank you, Taiwan, for being such a long-time partner,” said Little, a rancher and farmer from Emmett. “Taiwan is a loyal customer for our wheat farmers.”

An agricultural trade delegation from Taiwan visits the U.S. every two years to sign the agreement in Washington, D.C, as well as several wheat-producing states.

Little said those events are much more than just ceremonial pledges.

Since 1998, Taiwan has purchased 21 million metric tons of U.S. wheat, equivalent to 772 million bushels and worth a total of $5.8 billion.

Idaho farmers typically grow more than one million acres of wheat each year and that crop brings in about $400 million in farm-gate receipts to Gem State producers.

“This quality and consistency is well-recognized by the Taiwan Flour Mills Association,” Little said.

“I cannot overstate the importance of Taiwan to the U.S. grain industry,” Moon said.

Little will visit Taiwan in October on his first official trade mission as governor and will be accompanied by a member of the wheat commission. His recent visit to Europe was a trade trip.

He said Taiwan is a strategic export priority for Idaho and pointed out Idaho has maintained a trade office in that country for 30 years.

“We are looking forward to your visit to Taiwan as governor,” said Kuo-Shu Fan, director general of the Taipei Economic & Cultural Office in Seattle.

He said the Taiwanese government would like to increase its trade with the United States and pointed out that similar letters of intent to purchase U.S. meat, corn and soybeans were also recently signed.