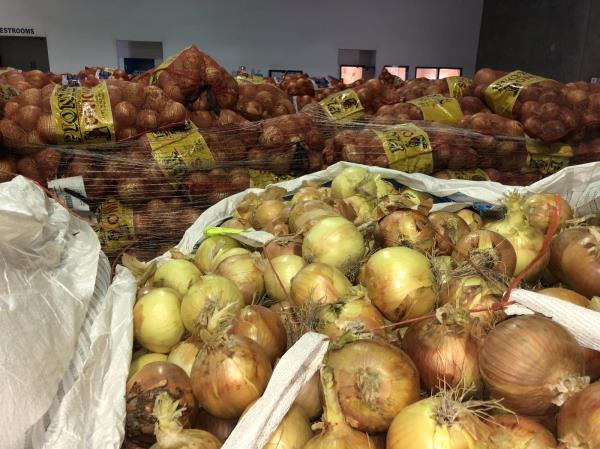 PARMA — The first onion trucks are rolling at Fort Boise Produce outside of Parma.

“I’d say we have an average crop,” said Farmer. “Due to early spring and the rain, growers didn’t get to plant until the third week of April. The crop is a little behind. It has caught up but I’d say it’s an average crop. Had we started on time, we’d have a bumper crop.”

Onions are a big deal in the Treasure Valley with farmers planting more than 20,000 acres this year. Nationally, Idaho ranks 4th in the nation in onion production producing 25 percent of the total US onion crop.

“The quality looks great, but they’re a little green right now. Just from what I’ve seen so far, this will be a  good crop and I think we should have a good season for growers in this valley,” said Farmer.

Packers say last year was a bumper crop in Canyon County with some of the highest yields in the nation. But a late start last spring with heavy rain will keep the bumper tag away this year, but so far the quality of onions at the Fort Boise shed is a pleasant surprise.

Producers and shippers agree that the biggest challenge of 2019 could be market prices. According to the USDA market report, demand is good with 50-pound sacks of colossal onions going for $11.00, barely break-even prices.

“They’re average right now, they’ve come down quite a bit because of lack of demand and a few other growing regions that went longer than we would have liked,” said Farmer.

At Fort Boise Produce they’re packing then shipping onions, sun-up to sundown as the harvest kicks into full gear.

“But still it’s at a decent for shippers and growers. We hope prices hold and we hope that maybe once the onions get in the barn and storage is done that yields are not too high prices will come up a bit,” added Farmer.

No one knows what the total Treasure Valley acreage of onions is yet. Some packing sheds say 20,000 others say acreage totals could hit 24,000, a record. In a supply and demand market, farmers hope for lower acreage numbers.