Rob Bearden, aka the Tractor Doctor, talks about some of the 60 pieces of antique farm equipment that J.R. Simplot purchased from an auction in 1998. The other 50 pieces are built into the JUMP facility in downtown Boise. 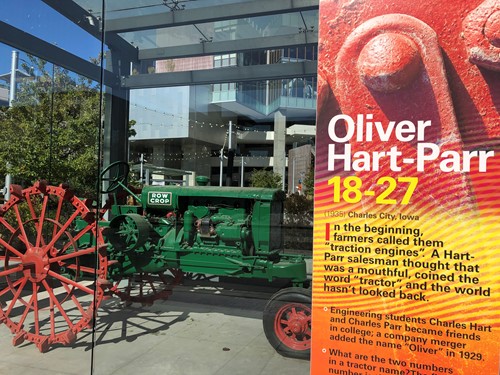 BOISE – The novelty or fun factor associated with the 50 antique tractors that are built into and around the JUMP facility in downtown Boise is not wearing off.

The JUMP facility opened in December 2015 and the tractors were incorporated into the design of the facility.

“They’re more popular than they ever were,” says Rob Bearden, the curator of the JUMP facility’s tractors, whose title is literally Tractor Doctor. “The more we promote them, the more and more people show up and see them.”

Jack’s Urban Meeting Place is a $70 million community gathering center funded by the family of the late J.R. “Jack” Simplot, who was known as “Mr. Spud” because of his role in putting Idaho potatoes on the map.

The tractors that adorn the JUMP facility are among 110 pieces of antique agricultural equipment Simplot purchased during an auction in 1998 from an agricultural museum owned by Oscar Cooke, a Montana farmer who died in 1995.

Bearden says Cooke had the largest collection of tractors and farm implements in the world at the time and Simplot bought the best of the best.

The 110 pieces of farm equipment Simplot purchased in themselves form one of the world’s premier collections of antique and oddball tractors, he says.

Some of them almost look like they could have come out of a Dr. Seuss book.

Others, such as Kerosene Annie, a 1909 Rumely prototype, are literally one of a kind.

Some are the last of their kind, such as a 1910 Olmstead, a four-wheel drive articulating tractor that is the only one left of 28 made.

The collection includes a 1923 Avery Track Runner, which is only one of two left in the world.

The tractors located inside and outside the JUMP facility are a popular attraction and people from all over the U.S. and world come to visit them, Bearden says.

He says the tractors, which date from the 1890s to 1939, border on being national treasures because they tell the story of the evolution of machinery and agriculture.

“They’re far beyond just antiques,” Bearden says. “Antiques are just a bunch of old stuff. These are more than that. Some of the history involved in these things, the national history and the tractor itself, just makes them very special.”

“You see the whole evolution of tractors here at JUMP,” he says. “We’ve got it all.”

Given enough time and money, all of the tractors could be used on a farm again, Bearden says. He recently got Kerosene Annie running again and drove her Sept. 5 in the Western Minnesota Steam Threshers Reunion in Rollag, Minn.

“It was awesome; the first fire was crazy,” he says. “It was the first time I ever plowed with a tractor with a five-bottom plow and it happened to be a 1909 factory prototype with chain steering on it.”

Bearden won’t say whether he has a favorite tractor among the collection; he says doing that would be like choosing a favorite child.

“Every one of them is just unique in its own way and a little fragment in the evolution of tractors,” he says. “Each one is a little piece of time.”

He says they are incredibly popular not just among farmers but also the general public.

“Pretty much everybody likes old tractors,” he says.

Idaho Wheat Commission Executive Director Britany Hurst Marchant says the tractor collection is a nice testament to the state’s agricultural roots and a great learning experience for members of the public who know little nothing about farming.

“The average American is now at least three generations removed from the farm, so having this connection to agriculture in an urban setting open to the public, helps to bridge that gap,” she says. “It’s neat to have a community center in downtown Boise that helps tell the story of Idaho and American farming.”

Bearden says he is constantly learning something different about the tractors, often from farmers.

“Every day’s a school day around here,” he says. “You’re learning something new every day here.”

The beauty of the JUMP facility, Bearden says, is that the public can stop by any time and view the antique tractors.

“You can see them any time; just show up,” he says. “They aren’t going anywhere. They are right here in downtown Boise, Idaho.”

For more information about the tractors or to schedule a private tour, visit the JUMP webpage: jumpboise.org, or email Bearden at rob.bearden@jumpboise.org

The other 60 pieces of antique farm equipment Simplot purchased are located at an undisclosed site in the Treasure Valley and there are some beauties there, too, Bearden says.

“You wouldn’t believe the stuff that’s out there,” he says.

Bearden says it hasn’t been decided exactly what will happen with those antique pieces of equipment yet.
“There will be something happening with them; we’ll just have to see what happens,” he says.