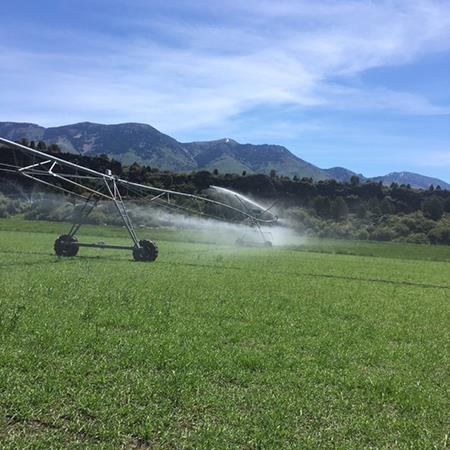 Several Portneuf River watershed irrigators are reportedly in negotiations to develop a mitigation plan that would allow them to continue diverting water in the face of a delivery call by the Surface Water Coalition.

The fundamental principle of Idaho water law is, "First in time, first in right," meaning holders of the most senior water rights are granted priority to divert.

Tim Luke, IDWR water compliance bureau chief, explained the notices to the Portneuf River watershed irrigators were mailed regardless of the priority dates of their water rights.

The coalition initially filed its delivery call in 2011.

Luke said on May 26 that IDWR is temporarily delaying curtailments of junior rights holders in the two water districts to allow the sides to reach a settlement.

Luke said one of the options on the table is for junior irrigators to purchase or rent a block of water from the Surface Water Coalition. Irrigators have also reportedly been discussing options to rent water from the city of Pocatello and the Shoshone-Bannock Tribes.

McCammon rancher Jim Guthrie said he and a couple of other water users have been meeting together with the coalition and are "cautiously optimistic" about reaching an agreement that will allow them to continue irrigating.

Luke said irrigators within the two districts were required to have their diversions fitted with flow meters and measuring devices by this season to quantify how much water they're actually using.

Luke said the department has staff inspecting diversions throughout the area to assess compliance.

Guthrie hopes the watershed's irrigators will be afforded the flexibility to use data gathered this season with their measuring devices to determine their water-call obligations based on the actual volume of water they're using.

"We've been putting in measuring devices and flow meters. I think most water users have those in," Guthrie said.

Guthrie said a long-term solution may involve getting legislation approved to create a governing body over the water district with the ability to make legally binding assessments on water users to cover costs of mitigation arrangements.

He said trigger points could be established based on specific streamflow levels to determine the level of mitigation necessary.

Motivated by a below-normal runoff forecast for the Upper Snake River, the coalition and other senior water users sent a letter on April 23 to IDWR's director, requesting that he instruct watermasters in the Portneuf River Basin to regulate their surface water rights during the 2021 irrigation season in priority with Snake River water rights.

The Portneuf is a Snake River tributary.

The watershed has historically been regulated separately, but IDWR agreed to combine administration of Portneuf and Snake River water rights for the first time this year.

IDWR noted in a press release that the Snake River Basin Adjudication has been completed, which has led to all water rights in the river systems being legally defined and decreed.

Ground water users throughout the Eastern Snake Plain Aquifer are also subject to the coalition's delivery call. Several cities and ground water users represented by Idaho Ground Water Appropriators Inc. reached a settlement in 2015, allowing them to continue irrigating with their wells in exchange for agreeing to a substantial mitigation package.

On May 26, IDWR also sent curtailment notices to 129 water users representing 136 junior ground water rights not protected by the terms of the settlement.

Luke said the ground water rights are junior to May 30, 1989, and there's a projected 40,000 acre-foot shortfall this season.