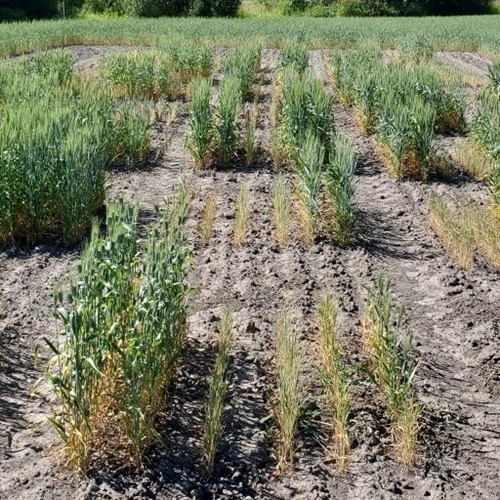 MOSCOW, Idaho – A northern Idaho farmer planted barley after a few years of raising Kentucky bluegrass. The barley seedlings grew to about 3 inches tall and then started to die.

The cause of the crop failure was apparent when the farmer checked the pH of his soil; it was 4.4, which is much too acidic for barley.

Growers throughout northern Idaho, especially those who plant barley, have reported similar experiences.

University of Idaho Extension barley agronomist Jared Spackman and UI Extension cropping systems agronomist Kurt Schroeder suspect many fields in the region that have historically been suitable for grain production but have been trending acidic are finally getting too far out of balance.

In parts of eastern Idaho, where soil acidity is also becoming a problem, Spackman has started a study on applying sugar beet lime, a byproduct of the sugar extraction process, as a means of raising soil pH, thereby improving crop health and keeping weeds in check.

Agricultural lime is typically composed of calcium carbonate. The carbonate reacts with acid in soil to neutralize it, and the calcium can benefit crops deficient in the nutrient.

Lime supply is limited in northern Idaho, adding to the cost of application for farmers needing to raise their soil pH, such as the barley grower who contacted Spackman about his lost barley crop.

“He’s running out of viable options for growing his rotation crops,” Spackman said. “I’m sure it’s becoming a more and more widespread issue, especially farms that were taken out of a forested system rather than prairies.”

Schroeder added, “Lime application will be challenging due to the cost and landowner arrangements, but it will eventually be about the only solution.”

A neutral soil has a pH reading of 7. Soil becomes more acidic as the number gets lower and more basic as it increases. At a low pH, microbial activity declines, interfering with nitrogen mineralization.

Some nutrients will leach below the rooting zone at a low pH, and some will bind to minerals, making them unavailable to plants.

Over time, soil pH may decline following nitrogen fertilizer applications, as nutrients are removed from the soil at harvest, and when excessive rainfall or irrigation leaches soil nutrients down the soil profile.

Soil acidification in northern Idaho has been documented since the 1980s. Schroeder has been studying the issue in the region for the past 12 years, dating back to when he worked for USDA’s Agricultural Research Service in Pullman, Wash.

About eight years ago, shortly after Schroeder arrived in Idaho, he and Doug Finkelnburg, a UI Extension educator specializing in cropping systems, conducted a soil survey of northern Idaho. They found about 30 percent of soils sampled had a risk of aluminum toxicity due to low pH.

Schroeder screens wheat lines in his variety trials for tolerance to aluminum toxicity, and he’s convinced growers who may not be aware of the acidity problem are already sacrificing wheat yields.

Barley tends to be more sensitive than wheat to aluminum toxicity. Rather than addressing the pH problem, Schroeder has found many growers in the region have simply stopped planting barley.

Schroeder is now in the sixth year of a liming trial examining how lime rates of 0, 1, 2 and 3 tons per acre at four northern Idaho sites affect rotations with cereal and legume crops.

“In addition to observing significant increases in soil pH and reductions in soluble aluminum, there has been an average yield increase of 14% and 19%,” Schroeder said.

Schroeder hopes to publish some Extension papers on the long-term benefits of liming based on his data. Though northern Idaho lacks an ample supply of affordable lime, some growers in the region have gotten lime from a former Amalgamated Sugar Co. plant in Moses Lake, Wash.

The Nez Perce Tribe has also discussed the possibility of mining and crushing limestone to supply area farmers.

Spackman is in the initial year of his study, funded by the Idaho Wheat Commission. It’s planned to last between three and five years.

Last fall, he applied lime at rates of 0, 2, 4 and 6 tons per acre at three irrigated commercial sites in Ashton, where farmers were transitioning from seed potatoes to wheat.

He also applied lime on a Swan Valley dryland field now planted in barley. Participating growers will manage their fields as they normally would.

Spackman has started gathering the first of many sets of soil samples to assess how his lime applications are changing soil pH. He’s taking samples at 2-inch increments down to a foot deep to monitor how pH varies by depth.

“Most growers don’t necessarily see the impact of lime application until the year after because it can be slow to react,” Spackman said. “I’m interested in seeing how quickly the soil changes.”

Farmers in the Ashton area haul in lime from Amalgamated Sugar’s Magic Valley processing operations. It would be extremely costly to haul lime from Magic Valley all the way to northern Idaho.

“We always appreciate when the U of I researchers bring relevant topics for funding, and we know this is a growing issue across the state and it’s something we need to start finding creative solutions to resolve,” Chumrau said.

Spackman’s research should provide insight into how much each ton of lime can affect pH in various soil types, as well as how long the benefits may last.

Research on Montana dryland farms showed lime applied at 2.5 tons per acre could raise a soil pH from 4.7 to 6.0 with an expected remediation time of 15 to 20 years. Results could be significantly different on an irrigated farm in Idaho.

Lime tends to move very little through the soil profile, and the more it’s mixed into the soil the faster it reacts.

Spackman anticipates lime applications will also reduce weed pressure, either by stymying weed development or by contributing to healthy crops that outcompete weeds. He’ll evaluate the weed response as part of his study.