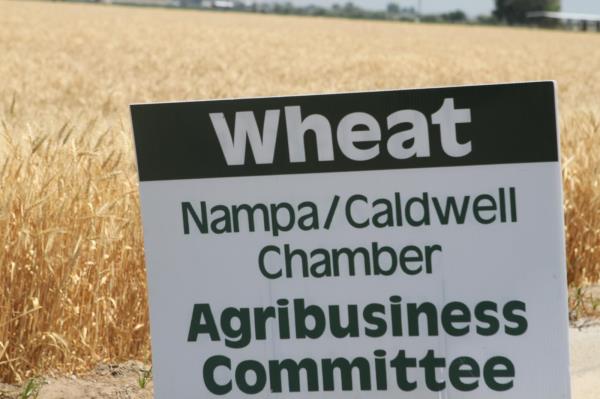 Wheat farmers throughout Idaho are reporting average yields and good quality, though they’re harvesting about two weeks behind schedule, according to industry sources.

In general, University of Idaho Extension cereals experts say disease pressure was light throughout the state’s southern and eastern growing areas, but there were some isolated cases of severe losses caused by rot and frost damage.

For the week ending Aug. 17, USDA’s National Agricultural Statistics Service reported 36 percent of Idaho’s winter wheat had been harvested, compared with a five-year average for the week of 70 percent.

“We’re running way behind schedule,” Idaho Wheat Commission Executive Director Blaine Jacobson said. “We had a lot of late-spring moisture, and it took a long time to warm up. That put the crop behind.”

Jacobson said harvesting late elevates the risk of heavy rainfall arriving and contributing to sprout damage of kernels, but the harvest weather has cooperated thus far, and big storms aren’t in the forecast.

Jacobson said the wheat market had been strengthening until recently, when NASS released some forecasts raising some grain crop-production estimates.

Marshall said the soil-borne diseases surfaced throughout Eastern Idaho and west to Burley, especially in fields in which farmers planted wheat in consecutive seasons. In some fields, yield losses exceeded 10 percent, she said.

Marshall said cool and damp spring weather in the region provided ideal conditions for the soil-borne diseases to take hold. Other fields, especially in the Rexburg area, sustained frost damage. Marshall explained the severity of frost damage varied depending on the growing area, the variety planted and the date of planting. Fields that were flowering when frost occurred were highly susceptible to damage, she said.

“Depending upon the timing of flowering, we could see side-by-side fields of spring wheat where it was 80 percent empty heads next to a variety that wasn’t affected,” Marshall said. “We’ve also seen damage in winter wheat and spring barley.”

Marshall said damaging frosts occurred from June 6 through June 8, as well as on a few other days, depending on the location.

“There are certain growers around Buhl and Twin Falls who have hit near 200 bushels,” Marshall said, adding that many Magic Valley growers who managed their fields appropriately have enjoyed above-average harvests.

Olga Walsh, a UI Extension research assistant professor of cropping systems and agronomy, said disease pressure was also generally low in the Treasure Valley, though some growers in the Nampa area suffered yield losses of up to 50 percent due to Fusarium root rot.

Walsh said grain test weights — referring to a quality standard based on the weight of a bushel of grain — were encouraging in Southwest Idaho.

“Our yields in Nampa are also very good,” Walsh said. “We had very good conditions for grain this year.”