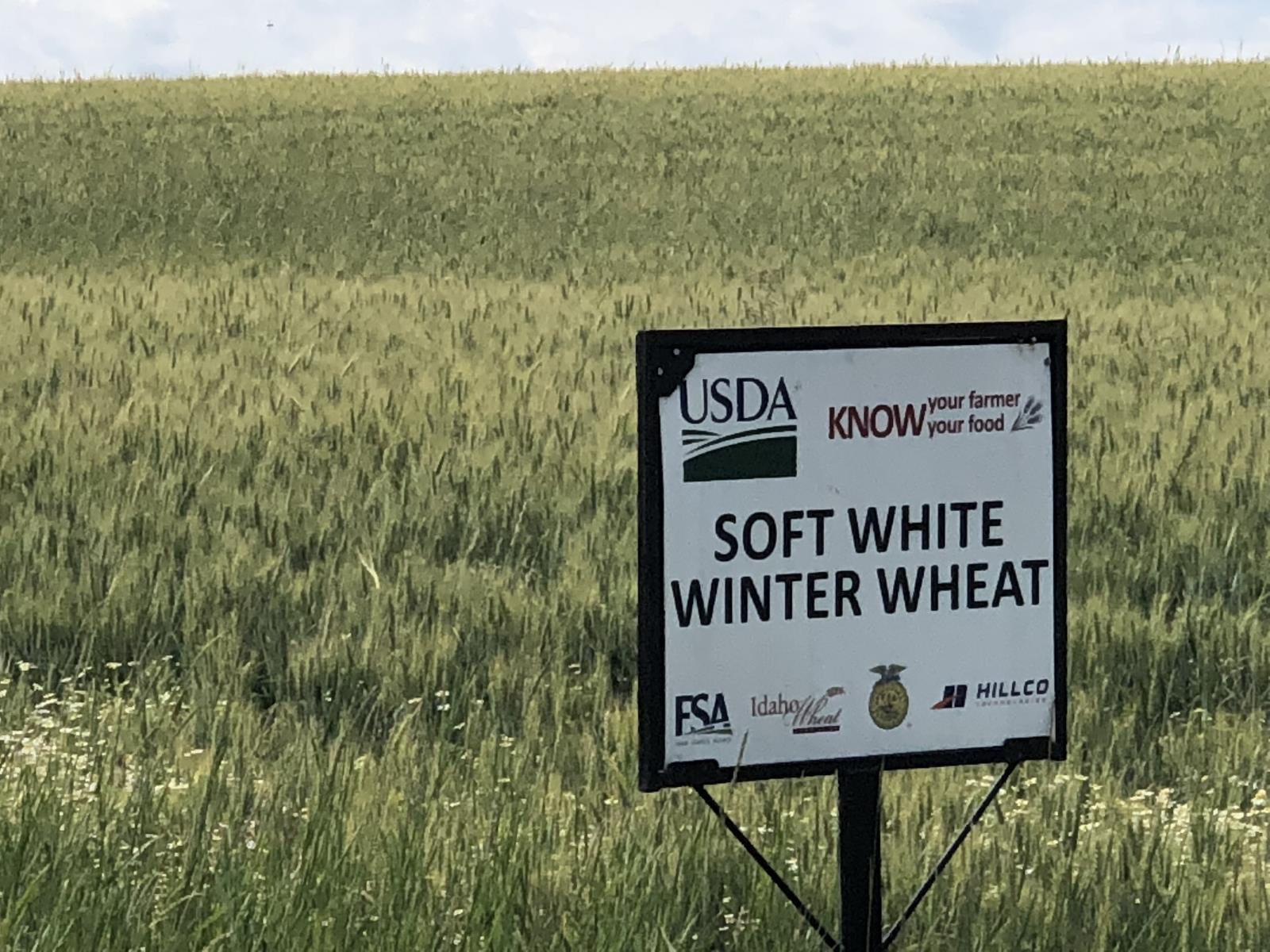 There are several reasons for that, but according to Idaho wheat industry leaders and grain farmers, one of the main factors is that national and international customers know that Idaho produces a consistent, quality crop almost every year.

Besides being exported to other nations, Idaho wheat is shipped to about 26 states and many customers in those states jump over other wheat-producing states to come to Idaho, says Blaine Jacobson, former executive director of the Idaho Wheat Commission.

“What really makes our crop unique is the consistency and quality,” he says. “Idaho has the most consistent crop of any wheat growing state.”

The fact that most Idaho wheat is grown under irrigation with water from the state’s many reservoirs plays a big role in that, Idaho wheat industry leaders and farmers say, as does southern Idaho’s dry desert climate, which keeps disease and pest issues to a minimum compared to many other wheat producing areas.

“The irrigation infrastructure we have in Idaho obviously helps us keep a very stable production (of wheat) every year,” says IWC Executive Director Casey Chumrau.

Jacobson says Idaho has a higher percentage of its wheat crop under irrigation than any other state and the dryland wheat growing regions of the state without irrigation usually enjoy favorable rainfall.

“Year in and year out, the rain in those areas almost always comes at the right time,” he says.

Idaho’s wheat growers, through the assessment dollars they pay that fund the wheat commission, have spent a lot of money over the decades on wheat breeding and other research programs that focus on wheat quality.

Idaho growers, as well as their counterparts in the Pacific Northwest, “have a long history of investing in quality,” Chumrau says.

When it comes to wheat, she adds, “There are a lot of other states that would love to be in the position that Idaho is in. Idaho grows really high-quality wheat.”

Total wheat acres in the U.S. in 2020 reached their lowest level since records on that statistic started being kept in 1919.

In 2020, corn for grain acres in the U.S. totaled 82.5 million and soybean acres totaled 84 million, according to USDA’s National Agricultural Statistics Service.

Over the past two decades, however, Idaho’s wheat acres have remained steady at about 1.1 to 1.2 million each year, according to NASS.

Because crops with GMO traits can be easier and more profitable to grow, it makes corn and soybeans more attractive to many farmers in areas where all three crops can be grown. In addition, GMO corn and soybeans have expanded the geographic area that can produce those crops, so they have become options to farmers who historically only grew wheat.

Another major factor is that during that same period since 1996, other parts of the world, particularly Russia, went from being net wheat importers to net wheat exporters, says “Genesee” Joe Anderson, a wheat farmer in North Idaho.

On the one hand, says Teton grain farmer Dwight Little, soybeans aren’t grown commercially in Idaho and while some corn is produced here, most of it goes to feed cattle and Idaho corn production is minimal compared to the major corn-producing states.

But besides that, he says, when it comes to wheat, Idaho is a state with favorable irrigation, climatic and other conditions that makes it profitable for farmers to grow the crop in virtually ever segment of the state.

Wheat is grown in 42 of Idaho’s 44 counties and ranks as the state’s No. 2 crop, behind potatoes, when it comes to farm-gate receipts, which is the revenue a farmer receives for their commodity.

In most years, Idaho leads the nation or ranks No. 2 in average wheat yields.

“Wheat’s a crop that can be grown in any state in the nation, but we do have favorable weather conditions and the irrigation in Idaho to make really good yields on wheat,” Little says. “Wheat has always been a staple crop in our area, and in Idaho. There are very few places that can match our irrigated yields.”

Wheat has always been an integral part of crop rotations in most parts of the state, Anderson says.

“Wheat is a good agronomic crop rotation to go with other high-value crops in Idaho like potatoes and sugar beets,” he says. “Wheat is a great crop for this state because it fits our climate and it fits our marketing opportunities.”

Idaho usually ranks between No. 5 and No. 7 nationally in total wheat production and five of the six classes of wheat are grown in Idaho. Most wheat growing states only grow one or two classes of wheat.

Because of that, Jacobson says, Idaho wheat farmers have the storage facilities to be able to segregate their wheat by variety, class and protein better than farmers in most other states.

The supply chain here can keep that wheat segregated and that makes Idaho an attractive place for customers looking to purchase wheat with certain characteristics, he adds.

“That ability to segregate wheat is a specialty that is not really matched in other states to the extent that it is here,” he says. “The fact that we can keep wheat segregated is one of the reasons that we have customers from across the county come here.”