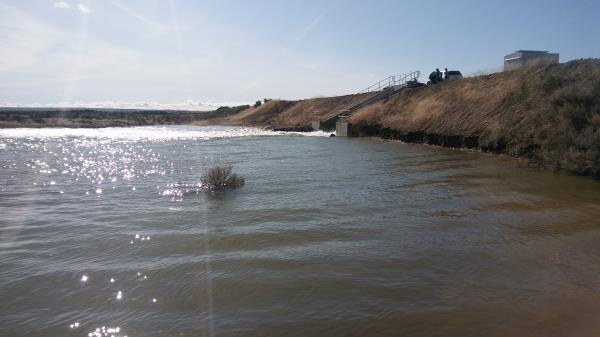 POCATELLO ­­– The Idaho Water Resource Board has already blown away its record for managed recharge into the Eastern Snake Plain Aquifer with at least a month to go in the 2017-18 recharge season.

And the previous record, set last year, blew away the existing record at the time.

The water board’s managed recharge program seeks to reverse declining groundwater levels and spring flows within the ESPA, which is a critical resource for many of the state’s farmers and ranchers, as well as municipalities and businesses.

As of April 5, the board had recharged more than 419,000 acre-feet of water into the aquifer during the 2017-18 season, which began in August and could last well into May.

“We have a really good shot at that, depending on the weather and a lot of factors, including irrigation demand,” he said.

“Our goal is to sustain the agriculture industry we have today and help it grow,” he said. “It’s such an important part of the state’s overall economy and we had to make sure we took care of our agricultural community.”

Since 2009, the state has had a managed aquifer recharge goal for the ESPA of 250,000 acre-feet per year. Last year was the first time that goal was achieved.

The large amount of water the program has been able to recharge into the aquifer the past two years is a result of last winter’s extremely abundant snowpack levels, which are still providing ample water to fill reservoirs, increase stream flows and perform recharge, Hipke said.

“We have a lot of water. Obviously, that was a big help,” he said.

He said the program won’t be able to recharge close to 500,000 acre-feet every year and during a dry year, the most that can be recharged into the ESPA is about 150,000 acre-feet.

“We are not always going to be able to do 500,000 acre-feet,” he said. “It’s great when we can, but in these wet years, we need to capture as much as we possibly can to make up for those really dry years. When it’s available, we need to move as much as we can.”

The significant amount of recharge accomplished the past two seasons is proof that the millions of dollars the state has invested in recent years in improving and expanding the infrastructure needed to perform recharge is paying off, said Brian Patton, planning bureau chief for the IWRB.

The recharge program began to significantly increase its capacity after 2014 when Idaho lawmakers began providing a significant amount of money to expand infrastructure, he said.

“It’s really exciting to see what we can do now compared to what we could do before,” Patton said. “I think this is a great investment on the part of the state of Idaho.”

Chase said the enhanced ability to recharge water into the aquifer has been a cooperative effort between the water board, legislature, governor, the canal and irrigation companies that make their ditches available to perform the recharge, and the taxpayers, who provided the money to improve the program’s infrastructure.

“I think it’s important to recognize the effort that the entire state of Idaho has made to make this work,” he said. “Our program is a success because everybody in the state understood the importance of recharge and found a way to do it.”