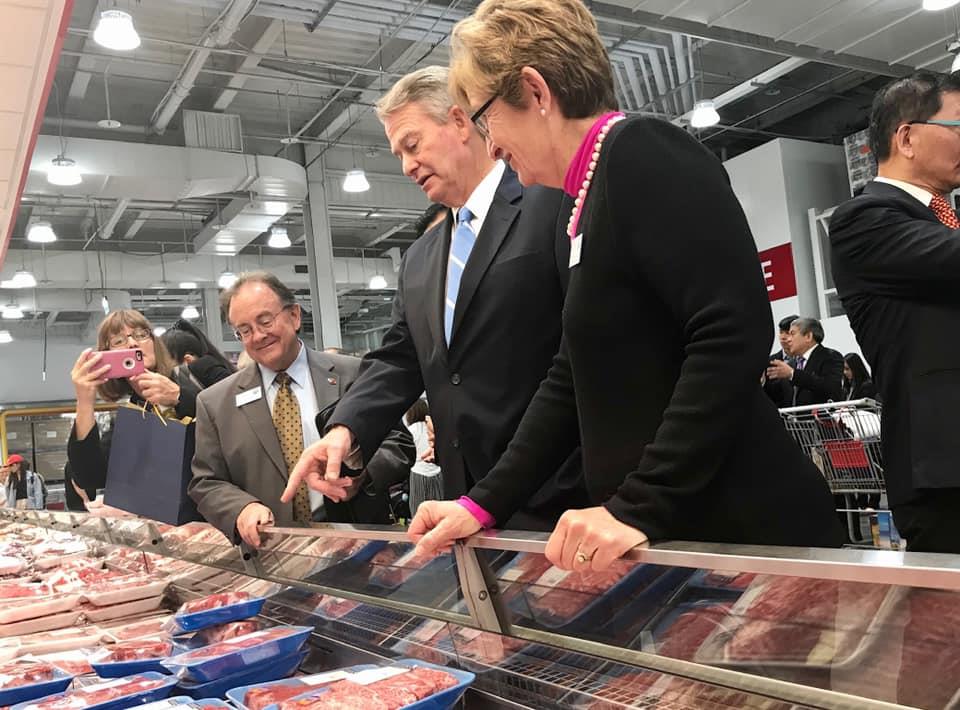 BOISE – Idahoans who participated in a governor’s trade mission to Taiwan and Hong Kong called it a success and said it could open doors to more trade opportunities for Idaho farmers, ranchers and other businesses.

“I felt we had a very successful trip to Taiwan. That is a market we do so well in,” Idaho State Department of Agriculture Director Celia Gould told Idaho Wheat Commission members Oct. 31 during the IWC’s regular meeting. “I felt good about the Hong Kong trip also. I think there are definitely some possibilities there.”

Gould, a rancher, attended the nine-day trade mission along with other representatives of Idaho farm organizations and agribusinesses.

“Our meetings with overseas businesspeople and government officials helped strengthen Idaho’s decades-old partnership and friendship with Taiwan and opened doors for new trade and investment opportunities,” Gov. Brad Little, a rancher who led the mission, stated in a news release.

The visit to Taiwan and Hong Kong, which began Oct. 18, was Little’s first official trade mission as governor. His recent visit to Europe was a trade trip.

His visit to Taiwan came a month after representatives of a Taiwanese trade delegation visited Idaho to sign a letter of intent to purchase 66 million bushels of U.S. wheat over the next two years. Much of that wheat will come from Idaho farmers and the deal is valued at about $576 million.

During the trade mission, representatives of Idaho’s wheat industry were able to further solidify the relationship between Taiwanese flour millers and Idaho farmers that dates back four decades.

“Idaho and Taiwan have a pretty special relationship and you can see it and you can feel it when we’re there,” Idaho wheat farmer Clark Hamilton, who participated in the trade mission, said during the wheat commission meeting.

Garrett Egland, who represented the wheat commission on the trade trip, said in the news release from the governor’s office that “the Taiwanese flour millers that we met with are great folks and loyal, long-term customers of high-quality Idaho wheat. It was a genuine pleasure getting to know them better and continuing to strengthen our relationships into the future.”

Taiwan is Idaho’s second largest export destination and companies there purchased more than $675 million worth of Idaho products last year, according to a news release from the governor’s office.

Beef and wheat are among the top Idaho agricultural exports to Taiwan and representatives from both industries, as well as the onion industry, joined the trade mission.

Trade delegation participants lauded the governor, a farmer and rancher, for his efforts in opening up doors in both nations.

“Governor Little was a tireless promoter of Idaho beef products in two amazingly strong markets for Agri Beef,” Jay Theiler, who represented Agri Beef Co. on the trip, said in the news release. “He may be the best salesman that we ever had, and we greatly appreciate his efforts on this mission.”

Jeremiah Clark, who represented American Mills on the trade trip, said it was a great marketing experience for that small business. He said the governor and his staff were helpful in setting up meaningful meetings with key personnel from potential customers.

“We are preparing a bid right now for one of our most promising contacts of the trip,” Clark said in the news release. “Governor Little was very adept in obtaining the respect and attention of companies we would like to do business with.”

In Taiwan, according to the news release, Little and the Idaho delegation met with officials from Mayfull Foods, a large customer of Idaho agricultural products.

In a meeting with Taiwanese President Tsai Ing-wen, Little encouraged Taiwan to open its market to beef from cattle over 30 months of age, a change that would enable Idaho producers to sell more product there.

The governor also met with Taiwan Hsin Lin, a major importer of food and consumer products. THL is a significant distribution network to many customers, including Costco Taiwan and Costco China, as well as other retail and food services.

In Hong Kong, Little and members of the trade delegation participated in a promotion event for beef cooking at AEON department stores, a major retailer of U.S. beef and Snake River Farms, an Idaho business.

According to the news release, Little also opened access for Idaho companies to senior leadership at Dah Chong Hong, a large trading company with a food division.

He promoted quinoa, cheese and onion products sold by Idaho companies during the Hong Kong visit.