Idaho set a record for net farm income in 2019 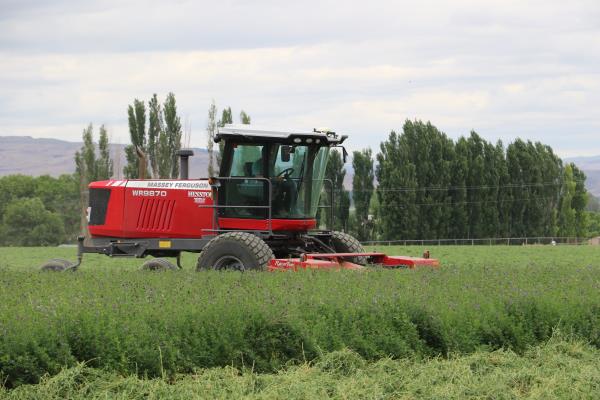 BOISE – Total net farm income for Idaho’s farmers and ranchers hit a record high in 2019 and was up 46 percent compared with 2018, according to a University of Idaho report that was released to lawmakers Jan. 2.

Total U.S. net farm income is forecast by USDA to have increased 10 percent in 2019.

“In a booming economy, Idaho agriculture is doing better than the boom,” said UI Agricultural Economist Garth Taylor, a co-author of the university’s annual “Financial Condition of Idaho Agriculture” report.

Agriculture is the main sector of Idaho’s economy and the annual report is released to state lawmakers shortly before the beginning of the new legislative session to help them set budgets for the next fiscal year.

Total farm expenses in Idaho were basically unchanged in 2019 but farm cash receipts, which is farm revenue or what the farmer gets for their commodity, increased by 10 percent compared with 2018, to $8.3 billion.

That is the second highest total for cash receipts ever in Idaho, behind the $8.8 billion total recorded in 2014.

The Financial Condition of Idaho Agriculture report estimates that Idaho potato farmers brought in a record $1.1 billion in farm cash receipts in 2019, up 15 percent from 2018 and 13 percent more than the previous record of $950 million set in 2012.

Dairy is the state’s top farm commodity in terms of cash receipts and milk receipts for Idaho dairy producers rose 19 percent in 2019, to $2.8 billion, the second highest level ever, behind the $3.2 billion total recorded in 2014.

Several months ago, Taylor said, it looked like it would be a decent year for Idaho’s agricultural industry but a significant bump in both milk and potato prices toward the end of 2019 brightened the outlook considerably.

“We wouldn’t have thought we would set a record for net farm income six months ago but very strong milk prices changed things and we’re also looking at record high cash receipts for spuds this year,” Taylor told Farm Bureau after his presentation.

Total crop revenues of $3.5 billion increased an estimated 12 percent in 2019 and total livestock revenues were up 10 percent to $4.8 billion.

However, Taylor pointed out, even in down years the state’s agricultural sector acts as a stabilizing impact on rural communities because farmers still spend the same amount of money on seed, fertilizer, labor and other inputs, regardless of how much money they made the year before.

In bad years, “The farmers may not be doing very well and grandma may not get the new kitchen remodel but the farmer still has to plant and harvest his crop and that cow still has to be milked and fed,” he said. “All those purchases the farmer has to make stay in place. Agriculture is a very stabilizing influence on the local economy.”

According to a recent UI study, agriculture is responsible for one in every five dollars in sales in Idaho, directly and indirectly, as well as one in every eight jobs and 13 percent of the state’s total GDP.

The average milk price in Idaho was up significantly in 2109 and output reached a record 15.5 billion pounds, according to the UI report. Production rose 3 percent compared with 2018 and prices averaged 15 percent higher.

According to the report’s authors, strong U.S. beef exports, which were down 2 percent from a record level in 2018, helped support higher-than-expected beef prices.

Potatoes remained Idaho’s top crop in terms of cash receipts and potato revenues, estimated at $1.1 billion, were 15 percent higher than the 2018 total and mark the first time cash receipts for the state’s iconic spud crop have topped the billion-dollar mark.

Potato production was down 6 percent from 2018 and the average yield of 435 hundredweight (cwt) per acre was down from the record level of 450 cwt in 2018. But the average price for Idaho spuds was an estimated $8.50 cwt, 25 percent higher than the 2018 price.

Wheat ranked No. 2 among Idaho crops in gross revenue at $516 million, down 1 percent from 2018. Production was down 5 percent and wheat prices averaged 3 percent higher.

Growers of Idaho’s No. 3 crop brought in $404 million in cash receipts in 2019, a 4 percent decrease from 2018. Idaho hay production was down 9 percent but prices increased 8 percent.

Idaho sugar beet growers brought in $322 million in revenue, up 12 percent from 2018, and the state’s projected average 2019 beet price of $48.51 per ton is 6 percent higher. Production was largely unchanged.

Total Idaho barley revenues are estimated at $253 million in 2019, up 17 percent compared with 2018. Production increased an estimated 1 percent and the average price was 4 percent higher.

Total revenue for Idaho dry bean farmers in 2019 is estimated at $46 million, down 39 percent from 2018. Production and prices were both down considerably.