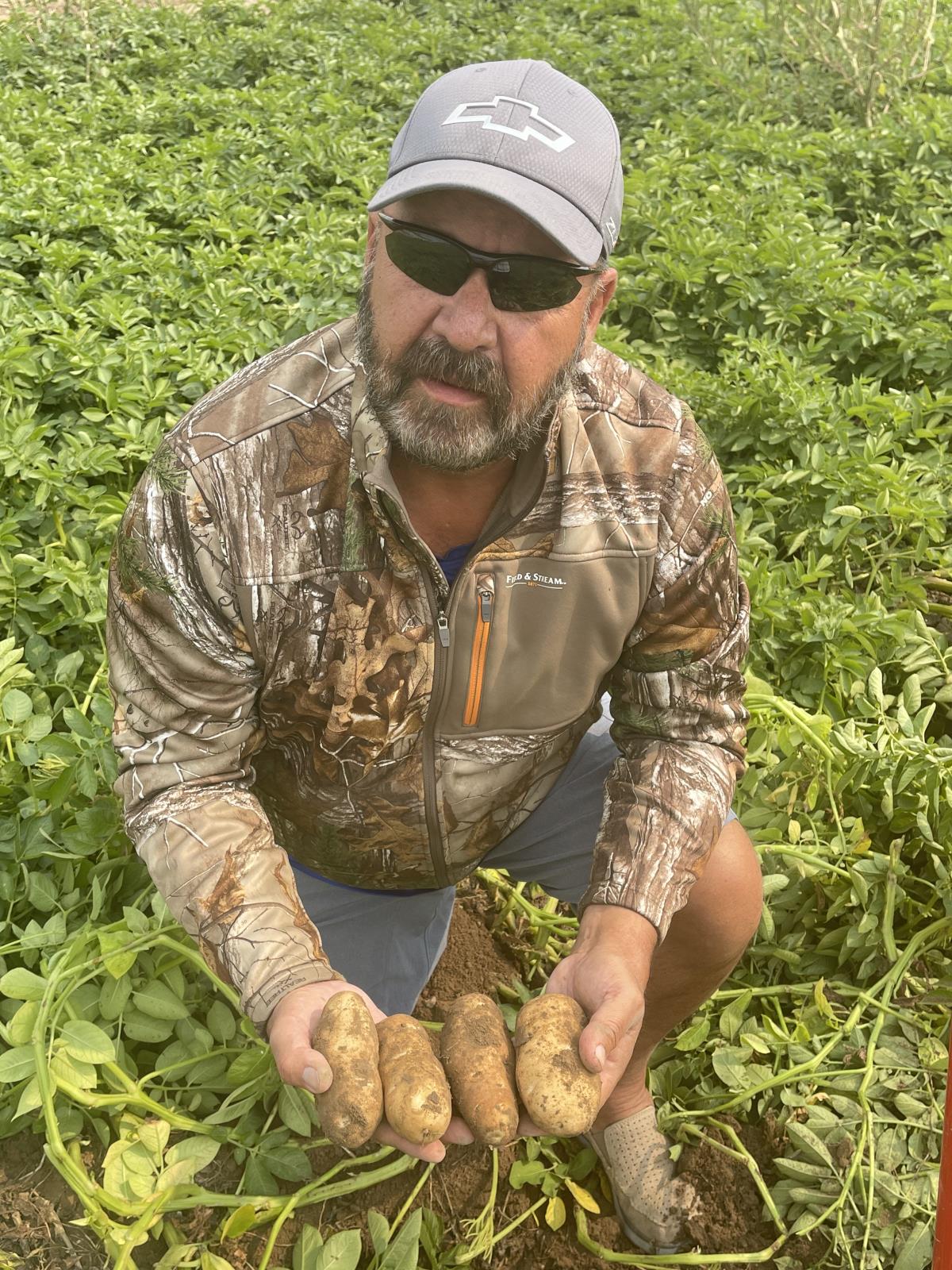 Randy Hardy, of Oakley, is not alone among Idaho farmers in his assessment that the potato crop he’ll soon harvest will be the worst of his career.

Where there are spuds, there are fewer than normal, and most of the tubers are undersized and misshapen. Some spuds resemble boomerangs; others are light bulb shaped.

“I’ve never had this happen before, and I’ve got an agronomist who works with me on potatoes and he’s been doing it for over 20 years and he said he’s never seen a worse crop than this,” said Hardy, who raises spuds for the fresh market and serves as chairman of the board of Sun Valley Potatoes. “... I would really be surprised if we don’t get into a ration situation where there simply aren’t enough potatoes to go around.”

It’s been an exceptionally hot, dry and smoky growing season throughout the Gem State, and farmers say their potatoes, grain and alfalfa have suffered because of the tough combination of conditions.

Growers with a sufficient irrigation supply are much more optimistic, however, about their heat-loving crops, such as sugar beets, dry beans and corn.

In Washington, Hardy noted, growers forced to dig early to supply processors have unearthed some “really scary stuff.” He said a few early digs are also underway in parts of Idaho.

Hardy isn’t scheduled to harvest until Sept. 20, and he’s hoping the extra time will allow his tubers to add a bit more bulk.

United Potato Growers of Idaho asked growers to submit results from Aug. 1 test digs and will gather follow-up data in person during harvest.

Hardy said the average number of tubers in the test digs was down 30 percent from last year. Weight was also down substantially, he said.

“We did a 10-foot test dig. Two plants out of the 10-foot dig had no potatoes under them,” Hardy said. “I’m not the only one who has heard that story. ... This is going to be more of a widespread thing than we’ve ever seen before.”

Typically, Hardy explained, farmers can expect to produce lots of big, top-grade tubers in years in which they get low tuber sets — referring to the number of spuds that grow beneath each plant.

In years with larger sets, they usually harvest more potatoes but with a slightly smaller size profile.

“We were waiting for spuds to come up like they normally do at the first of June. They were hesitant to come up. The ground was too dry,” Hardy said.

Hardy started watering on May 28, and he had three pivots that he never shut off throughout a seven-week period.

The potato set is determined in mid-June, before the development stage known as row closure when potato plants grow to form a solid canopy of foliage.

That’s when the state was hit with record heat, which contributed to a smaller set.

Then the smoke arrived from massive Western wildfires. Hardy believes the haze has impeded tuber bulking — dealing a double-whammy of small size and small set.

“When that August smoke hits every year, it seems they stop growing. This has been relentless (smoke) since the middle of June,” Hardy said.

Hardy estimates his wheat yields are down by about 20 percent this season. He noted that the wheat price has increased from about $5 per bushel to well above $7, thereby offsetting the disappointing yields.

Selling fresh spuds on the open market has its benefits in years in which crops are short. The lack of supply drives up prices and can offset poor yields and quality.

It’s a different story for growers who raise spuds for processors and are locked into contracted prices.

Jim Tiede, of American Falls, will start early digs on Sept. 12; those early spuds will be hauled directly to his fry processor.

Tiede said farmers who have been digging in his area have reported yields of 20 percent below normal, oddly shaped spuds and problems with specific gravity — a measurement of the amount of solid matter in each tuber.

“It’s going to be a short crop,” Tiede said. “Fryers have been very active out looking to purchase more.”

“We’re going to wait a little bit,” Tiede said. “I get the feeling most guys are doing that.”

One of the few bright spots in the state for potato growers is the Rexburg Bench in Eastern Idaho.

“Further down in the valley things are not as rosy as we would like them to be. Up in the Rexburg area at this point in time it looks like we’re closer to normal than some other areas of the state,” said Lynn Wilcox, with Wilcox Fresh in Rexburg.

Wilcox’s production area stretches about 45 miles from Rexburg to Monteview, where he’s concluded “some fields don’t have much under the plant.”

During Aug. 1 test digs, Wilcox said, a dig site within a Russet Norkotah field in Monteview yielded 9.4 pounds of potatoes and 42 tubers.

In the Rexburg area, however, another dig site yielded between 28 pounds and 32 pounds of potatoes and 88 to 94 tubers. Generally, quality and shape were also acceptable.

Amid a dry growing season, Wilcox said, showers that arrived at inopportune times have hurt the quality of his hay and grain. Alfalfa prices are now exceptionally high, but Wilcox described his hay crop as a “disaster.”

Rain fell on most of his first cutting. He said heavy late-season rain also ruined lots of wheat and barley.

The rain contributed to the spread of Fusarium head blight, which creates the DON toxin, causing loads of barley to be rejected by maltign plants and wheat to be snubbed by millers.

“We could really have used that rain in the middle of July,” Wilcox said.