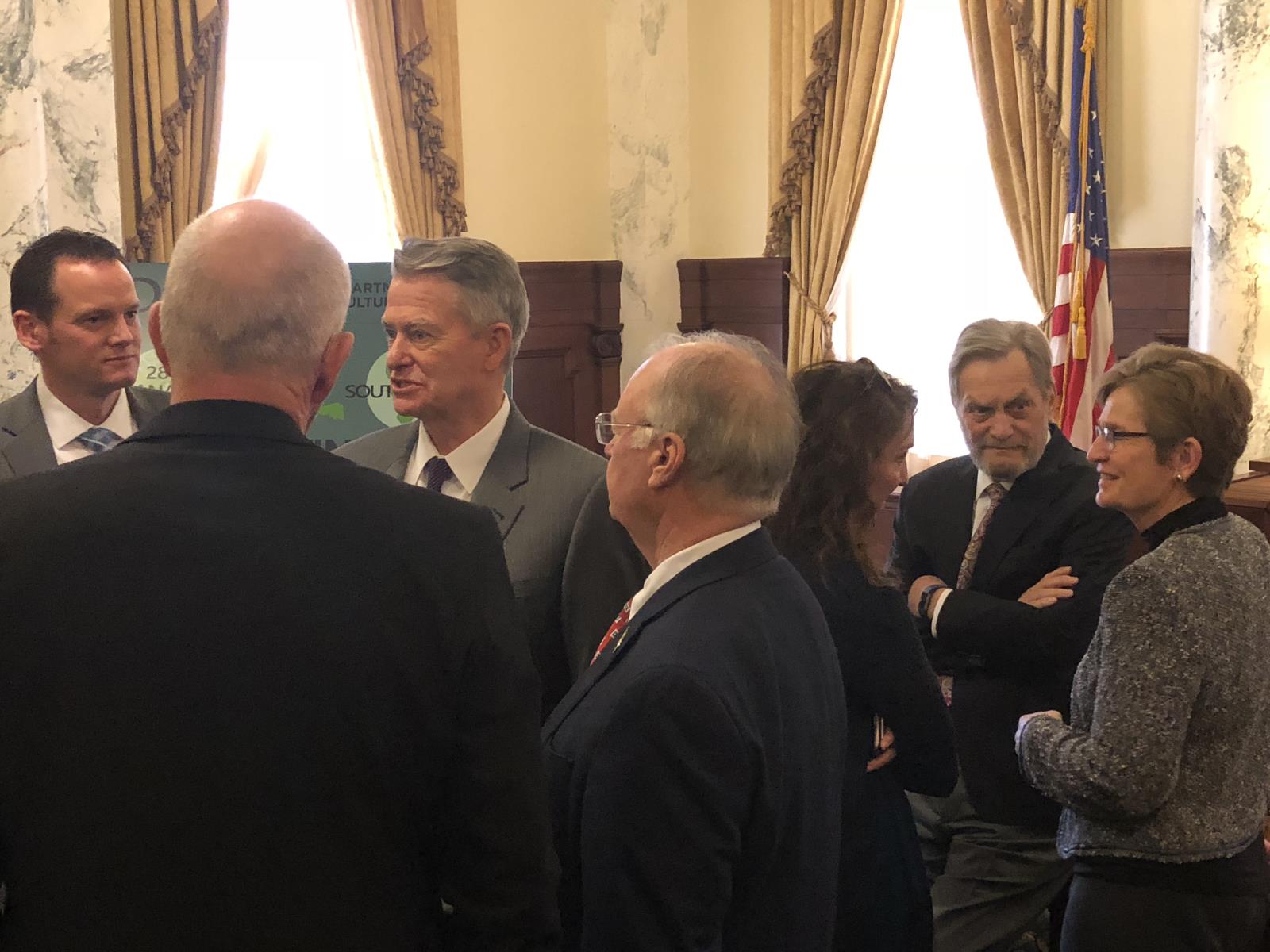 The agreement replaces the 25-year-old North American Free Trade Agreement between those nations.

NAFTA was good for U.S. agriculture but the USMCA improves upon the agreement and includes some big wins for some of Idaho’s main agricultural commodities, according to farm industry leaders.

Idaho farmers and ranchers produce more than $8 billion worth of agricultural commodities each year and half of that total is exported to other nations.

Agriculture is the main sector of Idaho’s overall economy, according to a University of Idaho study, so anything that helps the state’s farm and ranch economy will benefit the entire state.

USMCA “is going to be very important to Idaho agriculture and Idaho in general,” Rep. Mike Simpson, R-Idaho, said during a USMCA celebration event in the office of Gov. Brad Little, a rancher and farmer.

According to the Idaho State Department of Agriculture, about half of the state’s total farm exports go to Canada and Mexico.

ISDA Director Celia Gould thanked members of the state’s federal delegation, as well as state leaders, for helping make the USMCA a reality.

“I think it’s important to remember that nearly half of Idaho’s ag products are exported to those countries so … these markets for us are do-or-die markets,” she said.

When it comes to agriculture, the new agreement includes big wins for the U.S. dairy and wheat industries. Together, dairy and wheat producers in Idaho brought in an estimated $3.3 billion in farm cash receipts last year.

Members of those industries thanked federal and state leaders for their efforts to help ensure passage of USMCA.

Under the new agreement, Canada will provide new access for U.S. products, including for fluid milk, cheese, cream, butter, skim milk and powder.

According to U.S. dairy industry leaders, Canada’s Class 7 milk is a subsidized class of Canadian milk, including butter and milk powder, that is used to stop the import of concentrated milk proteins from the U.S.

Naerebout said addressing Canada’s Class 7 pricing system was the top goal of the U.S. dairy industry in the NAFTA renegotiation.

Mexico is the biggest trading partner for the U.S. dairy industry “and this agreement maintains that market access that we’ve had in the past and helps us continue to build relationships that we have down there,” Naerebout said.

When it comes to Canada, “we have not had much access to the Canadian market in the past and this does start to crack that door open,” he said. “More importantly, it does correct some of the pricing schemes that were being put into place up there that were damaging both to us here in the U.S. and the world market....”

Mexico and Canada are the top two export markets for U.S. potatoes and potato products.

“All potato growers ask for is a level playing field. U.S. potatoes, particularly Idaho potatoes, can compete very successfully in that environment,” Muir said. “I believe this new agreement allows us to expand what is already a very strong market for us both in Mexico and Canada.”

That was an issue the U.S. wheat industry had been working to resolve for a long time.

Idaho Farm Bureau Federation Vice President Richard Durrant, a Meridian farmer, said he has not heard any negative comments or concerns about the agreement from Idaho farmers.

He noted there are 183 farm commodities produced in Idaho and added, “It’s great that we’ve been able to produce a level playing field for all these commodities that we produce in Idaho.”

When President Donald Trump first announced he was going to renegotiate NAFTA, “I know a lot of folks in the agricultural community here in Idaho took kind of a big gasp,” said Sen. Mike Crapo, R-Idaho.

But the senator said the administration got the new agreement right and he said it will benefit farmers as well as the state and nation as a whole.

According to the independent U.S. International Trade Commission, the deal will add about $68 billion to economic growth in the United States and generate 176,000 jobs over six years.

“This is going to bring billions back into our market in the ag community and hundreds of thousands of jobs and it is going to be the kind of improvement in our trade that we deserve in America,” Crapo said.

But he said the new agreement is an improvement over the previous one.

“We’re very proud of what we have now,” Risch said.