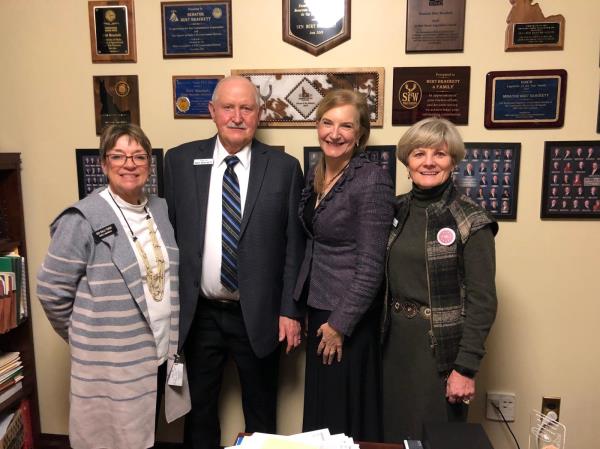 BOISE – Idaho lawmakers have formed the state’s first farm and timber issues caucus, which will focus on issues important to the state’s agricultural industry.

Early reaction to the Idaho Farm, Ranch and Timber Issues Caucus has been positive, said Rep. Caroline Nilsson Troy, R-Genesee, one of the four original founders of the caucus.

“I’m just thrilled with the response it’s gotten,” said Troy, who rents out 400 acres of farm land in a farm partnership.

According to a white paper providing an overview of the caucus, it “will address issues and concerns of the agricultural industry and those citizens, communities and counties who rely on farmers, ranchers, loggers and affiliated industries.”

According to a University of Idaho study, agriculture is responsible, directly and indirectly, for one in every eight jobs in the state and 13 percent of Idaho’s total gross domestic product.

According to the white paper, the caucus “will explore ways to act together to ensure Idaho has a comprehensive policy strategy to ensure agricultural and natural resource-based communities grow and flourish … We will be a point of contact for our agricultural and natural resource-based citizens to ensure their voices are heard on every level within the statehouse and across our agencies.”

About 25 lawmakers attended the first caucus meeting Feb. 3 and the topic was rural broadband. The group will meet every Monday during the Idaho legislative session and topics could cover a wide range of issues.

Caucus founders said it was important to them that the group be open to members of both parties and both branches of the 105-member Idaho Legislature.

“The uniqueness of a joint caucus can’t be overstated,” Rep. Sally Toone, a Democrat farmer and rancher from Gooding, stated in a news release. “We will be bringing many perspectives together to focus on issues impacting all of Idaho.”

The founding members of the caucus include two Republicans, two Democrats and two members each from the House and Senate.

Besides Toone and Troy, the other founder members of the caucus are Sen. Bert Brackett, a Republican rancher from Rogerson, and Sen. Janie Ward-Engelking, D-Boise.

“We’re being cautious not to make it a rural vs. urban caucus,” Troy said. “If you eat, you’re in agriculture.”

Troy said she had been mulling the idea of starting the caucus for six years and decided that with rural Idaho continuing to lose members and clout in the legislature because of the rapid growth occurring in the state’s urban areas, now was the time.

Following the 2020 Census, the redistricting process will begin in Idaho. After the state’s legislative districts are redrawn, rural Idaho could lose six to nine seats in the legislature, according to some estimates.

The idea is to help educate urban legislators or others who don’t have an intimate understanding of natural resource-related issues about the challenges that farmers, ranchers and other rural residents face in an increasingly complex society and economy, Troy said.

For example, she said, “We could address why the (2018) trespassing bill was so popular among farmers and ranchers. We want to help people understand what the issues are.”