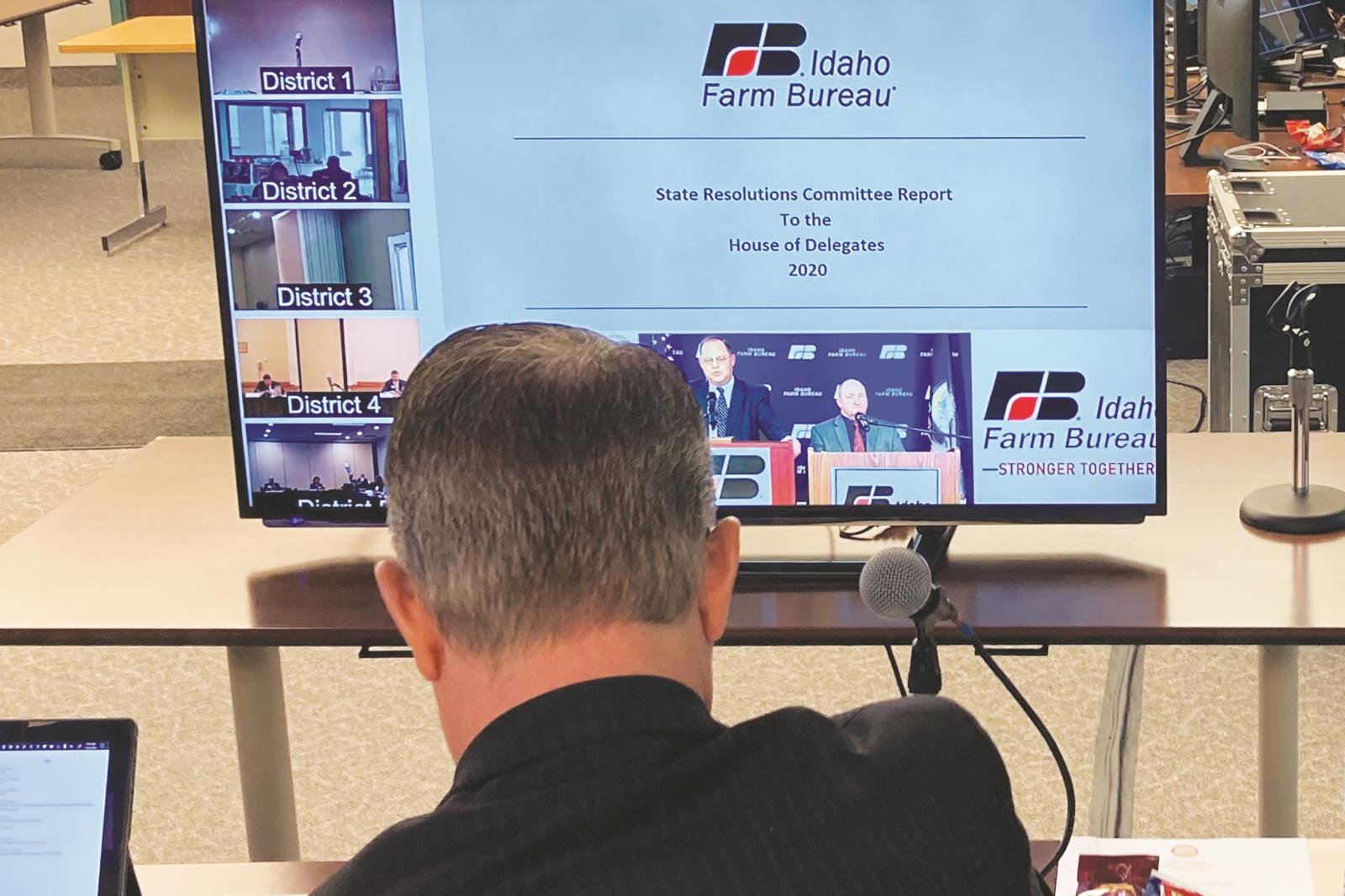 POCATELLO – For the first time in its 81-year-history, Idaho Farm Bureau Federation’s annual conference was held virtually this year, due to the gathering restrictions related to COVID-19.

Sixty-one voting delegates from 36 counties, all of them farmers or ranchers, participated in the Dec. 2 meeting from six different locations around the state.

But despite the wide geographic dispersion of voting delegates, the basic purpose and concept of the annual meeting was unchanged: voting delegates debated and voted on several changes to IFBF’s policy book, which gives the organization’s professional and volunteer members their marching orders during the coming year.

IFBF President Bryan Searle told delegates that the organization’s policy development process “is one of the most important things this organization does. It’s the best process, I believe, of any organization, bar none, in the nation and that’s because it starts with the grassroots.”

But he also said developing policy is just the beginning and Farm Bureau members need to work diligently throughout the year to ensure the group’s policies become fruitful.

“Is our work done now? Absolutely not,” said Searle, a farmer from Shelley. “We’ve only just planted our crop. We put the seed in the ground. Now we have to water it and … harvest it.”

Searle said Farm Bureau remains strong and effective but he encouraged members to strive to make the organization even better.

He said Farm Bureau is strongest when its members are united and he also said the organization needs everyone to play their part.

He said the strength of Farm Bureau is its grassroots.

“In order for things to happen, it happens in the counties,” he said. “It starts there; it starts with our grassroots.”

During the annual meeting, members supported three proposals that seek to make it easier for consumers to purchase meat directly from ranchers.

These proposals could simplify the pathway for cattle producers to sell directly to consumers, while maintaining a safe meat inspection process.

“The idea here is to think outside the box: How do we get safe, inspected beef to consumers in a different way?” said Lori Anne Lau, president of Caribou County Farm Bureau, which supported the proposals.

IFBF’s annual meeting brings together voting delegates from each of the state’s county Farm Bureau groups to vote on policy that guides the organization through the coming year.

IFBF is Idaho’s largest general farm organization and the group represents farmers and ranchers throughout the state.

Helping ranchers have other options to get beef directly to consumers was a main topic of discussion during this year’s meeting.

IFBF delegates unanimously adopted a policy that supports having one statewide licensing program to allow for the sale of meat in bulk to individuals. To do that now, a producer is required to get a livestock dealer’s license and a food establishment license in each health district where they want to sell.

There are seven health districts in Idaho and getting licenses in each one is time-consuming and expensive, said Kaytlin Abrahamson, president of Gooding-Lincoln County Farm Bureau, which introduced that proposal.

The delegates also voted to support a state meat inspection program in Idaho that would allow for the commercial sale of meat within the state.

That policy, which was introduced by Valley-Adams County Farm Bureau, also supports having more processing facilities in rural areas of the state, as well as allowing large animal veterinarians and other interested individuals in rural areas to become certified meat inspectors under a state meat inspection program.

Lau explained that Idaho could keep the existing USDA meat inspection program while offering these state-inspection options to ranchers as well.

The delegates also voted in favor of a policy that supports allowing states to create a standard of meat inspection for meat sold within the states that is different than the federal program but equally protective.

This policy would allow states the option to begin exploring that idea and any state-inspected program would supplement the existing federal program, not replace it, Lau said.

“This would allow states the option to investigate opportunities to create new and inventive ways to inspect meat that would only be sold within the state,” she said. “Right now, they are not even allowed to think about it.”

IFBF CEO Zak Miller pointed out the results of a recent annual Gallup poll that found Americans this year rated farming and agriculture as the industry they feel most positive about. It was the first time in the poll’s 20-year history agriculture ranked No. 1.

“Right now, the farmer has never been more respected,” he said.

Early during the pandemic, when some food items became hard to find at grocery stores because of temporary supply disruptions, some people were concerned about whether enough food would be available, Miller said.

Those fears were put to rest when it became apparent the nation’s farmers and ranchers were plowing ahead with their normal food-production plans and there would be no food shortages, and many people gained a new appreciation of agriculture because of that, he added.

“They now realize what they should have always known, that this is an honorable profession and that you do honorable work,” Miller said.

The challenge now, he added, is to make sure that “those who are appreciating so much what you do don’t tell you how to do that. And that’s why you are here today: to give all of us direction as to how to continue to be profitable and sustainable … without those who love you so much literally loving you to death through over-burdensome regulations or unrealistic expectations.”

IFBF Vice President Richard Durrant, a farmer from Meridian, thanked the voting delegates for making the effort to participate in the policy development process.

“Agriculture is something we’re very passionate about,” he said. “Thank each of you for taking the time and energy to be here today and to make this organization succeed.”

Searle said that while 2020 has been a challenging year due to the COVID-related issues, it has brought Idaho Farm Bureau Federation and other agricultural groups closer together and strengthened their relationships.

“As difficult as it’s been, we’ve developed stronger relationships with all of the other ag organizations in this state and nation,” said Searle. “It doesn’t mean we agree on everything but we’re stronger together because a world pandemic has brought us together to say, What can we do?”

He applauded the work of IFBF’s Young Farmers and Ranchers group, which is open to any farmer or rancher between the ages of 18 and 35.

The YF&R group “is investing in our future,” Searle said. “Our Young Farmers and Ranchers program continues to surface strong leaders. They are phenomenal. They are the future.”

Searle said he is ecstatic about the potential of IFBF’s new Promotion and Education Committee, which will seek to bridge the gap between consumers and producers by sharing agriculture’s story.

“Our P&E Committee is going to be able to reach every area of agriculture, to promote and educate others,” he said.