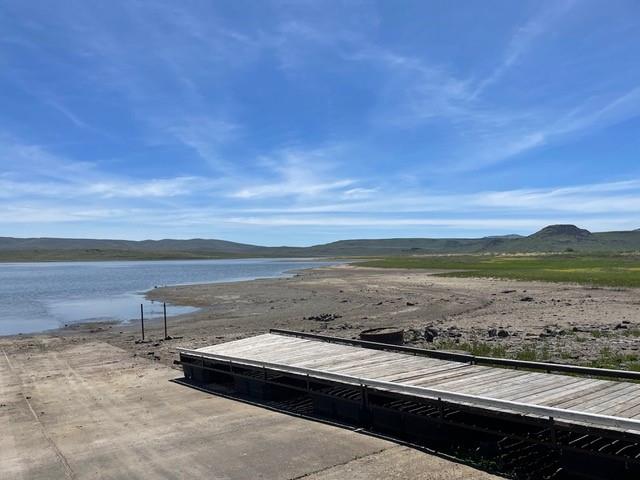 POCATELLO – This year’s drought in Idaho is not unprecedented but it is one of the state’s driest years on record.

According to reports from farmers and water manages across the state, this year’s drought will have a significant impact on Idaho’s 2021 crop year.

“I’ve been farming for 20 years and it’s by far the worst it’s ever been in my farming career,” said Cory Kress, a dryland farmer in the Rockland area.

Idaho’s water year runs from October to September and 2021 is the fifth driest water year on record, according to David Hoekema, a hydrologist with the Idaho Department of Water Resources.

The heat and lack of precipitation in Idaho this year have had significant impacts on dryland agriculture and rangelands.

The lack of moisture has made life difficult for ranchers who depend on rangeland to hep feed their cattle. Little to no precipitation on rangelands has resulted in sparse feed for the cows.

“I actually feel worse for the cattle producers,” Kress said. “They are in a real tough spot.”

“Idaho is in the midst of drought that is unprecedented in recent memory, mostly due to an exceptionally dry spring followed by a summer heat wave,” Hoekema wrote in an Aug. 6 Idaho Drought Update.

The scarce moisture and heat are expected to reduce yields for many Idaho farmers this year, in some cases dramatically.

He said all his dryland neighbors are facing a similar situation.

“I have several friends (in the Soda Springs area) who aren’t even cutting their fields,” he said. “It wasn’t even worth getting the combines in.”

Dryland farmers in most parts of North Idaho normally can rely on a good amount of rainfall but this year has been different.

“The crops up here on the Palouse yielded about half or less of what they normally do,” said “Genesee” Joe Anderson.

He said canola, for instance, came in at about 1,000 pounds per acre vs. the more typical 2,500 pounds in a normal year and winter wheat yields were about half of what they normally are.

While there have been five drier years in Idaho, this year could end up being unprecedented in that the dryness was compounded by an early-season heat wave that began in June and pushed temperatures above 100 degrees in many parts of the state for a lengthy period.

“What we were hearing pretty much across the state was that irrigation was coming on way earlier and way stronger than normal just because of the heat waves that we were experiencing,” said Erin Whorton, Idaho water supply specialist with the NRCS.

But then the drought hit and there was basically no or very little precipitation in many parts of Idaho during the spring and summer. The heat exacerbated things.

“We didn’t get any spring precipitation … and then we were hit with 100-degree temperatures,” said Loveland. “It went from good to not good pretty quickly.”

It’s not just dryland farmers who are up against it this year. Even farmers who rely on irrigation have felt the pain, largely due to the excessive heat.

“Besides not having any moisture, the excessive heat has been outrageous. It has killed us,” said Weiser farmer Tristan Winegar.

Winegar had irrigation water during most of the season but the heat was relentless.

“Our water usage is much higher than normal,” he said. “We’re losing it to evaporation. The crop just can’t utilize it.”

Making matters worse, the reservoir that Winegar and other farmers in his area depend on for their irrigation supply shut off Aug. 17, almost two months earlier than normal.

“We’re in unchartered territory. We don’t know what’s going to happen,” he said about what will happen to his corn, beans and sugar beets that still have to fill out with no water. “We’ll make the best of it no matter what. Farmers, we do the best with what we’ve got.”

Even irrigators in Water District 1 who depend on the upper Snake River reservoir system are feeling the pressure this year. Water District 1 is the state’s largest and provides enough water to irrigate well over 1 million acres.

The water district began the year with quite a bit of carryover water in its reservoirs but it’s still been tight this year, said watermaster Tony Olenichak.

“Generally, most people (on the system) are going to make it through this year,” he said. “But there is the potential for some people to lose a crop.”

On the other side of the state, Pioneer Irrigation District, which gets its water from the Boise River system and supplies water to more than 34,000 irrigated acres, shut off its water in early September, a good month earlier than normal.

“It has been a struggle this year,” said PID President Alan Newbill. “The heat and shortage of water have not been a good combination.”

While it appears most Idaho farmers who rely on irrigation water will make it through this year with enough water, some by the skin of their teeth, next year’s water season is a major concern.

Most Idaho reservoirs entered the 2021 season with ample carryover water but that is mostly not the case heading into the 2022 water year, which begins in October, Hoekema said.

The good news, he said, is that the current forecast favors a wetter winter than normal in Northern and Southern Idaho.

The bad news is that if that doesn’t happen and this winter’s snowpack is below normal, Idaho’s 2022 water year could be worse than 2021.

As of mid-August, the upper Snake reservoir system, which has the capacity to hold 4 million acre-feet of water, was 30 percent full. Water District 1 managers are projecting the system will only be 10-20 percent full when this year’s water season ends Sept. 30.

Last year, the system was 54 percent full when the water year ended.

“We need an average or above-average snowpack this coming winter,” Olenichak said. If that doesn’t happen, he added, “then there will be shortages next year.”

“We’re going to need at least an average snowpack” this winter to be able to provide a normal amount of water to irrigators next year, said Newbill. “The more, the better.”

Things would have been much worse for farmers in Idaho if the state’s reservoir systems didn’t enter the 2021 water season with a good amount of carryover water, Whorton said.

“Every reservoir you drive past now is so low,” she said. “If we don’t hit the winter we’re hoping for, I think next year could be really hard for a lot of folks.”

The late-season rains that hit much of the state helped soil moisture levels but they weren’t near enough to make up for what happened before that, farmers and water managers said.

“It’s been raining today and yesterday and this is probably the best mood I’ve been in for several months,” Kress said Aug. 19. “This is a lifesaver as far as getting fall crops in.”

But, he added, “It hasn’t solved the problem by any means. If we don’t get enough snowpack this winter, even the irrigators are going to be dryland farmers next year.”