“I contend that for a nation to try to tax itself into prosperity is like a man standing in a bucket and trying to lift himself up by the handle.” -- Winston Churchill 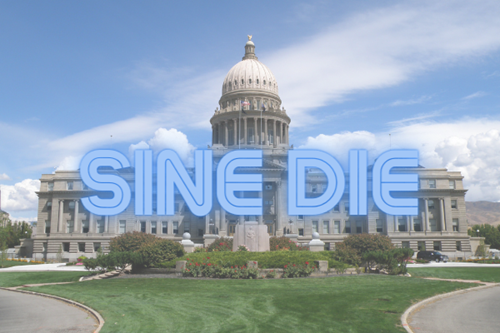 BOISE- On March 31 the 66th Idaho Legislature officially adjourned Sine Die (Latin for without day) meaning they have concluded their work for this year.  Idaho is somewhat unique compared to other similar-sized states in that our legislature meets every year but does not have a set date to adjourn. Many other states only meet every other year, or work just on the budget one year and then pass legislation on the off years.  Some also have a set date for their legislature to adjourn.

This year 593 bills were introduced, which is somewhat higher than typical. 288 bills, or about 49%, were approved by both the House and Senate, and Governor Little ended up vetoing six bills this year. The Senate attempted to over-ride the veto on one bill regarding employer vaccine mandates, but came up two votes short, so the veto stands. Three Republican Senators switched their votes on the over-ride, siding with the Governor.

There were some good things accomplished during this session, including a permanent cut in state income tax rates, making it easier to secure a CDL license, removing the emissions testing requirement for vehicles in the Treasure Valley, protecting taxpayer rights and some small progress was made in reducing property taxes. 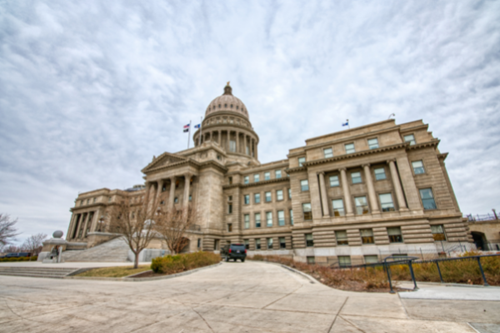 Below is a description of several of the bills that Farm Bureau followed during this session:

H436 - Income Tax Cut - Permanently reduces the top marginal income tax rate from 6.5% to 6%.  The corporate income tax rate is also reduced to 6%.  H436 also provides a one-time rebate of approximately 12% of individual’s 2020 income tax liability, or $75 per dependent, whichever is greater.  Those checks will be distributed over the next several months.  LAW.  AFBF policy #439 supports.

H512 - Limitation on Repeat Bonds -  Prohibits the same or similar bond from being run again within 11 months of a vote rejecting the bond measure.  Held in Senate State Affairs Committee. IFBF policy #92 & 99 supports.

H525 - Driver’s licenses, permits - Extends the time in which a Commercial Learner’s Permit expires from 180 days to one year. This saves time and money as the individual does not need to go into the DMV and pay to extend their permit every 180 days, as previously required.  LAW. IFBF Policy #139 and Beliefs & Philosophies Supports.

H526 - Commercial Licenses, Permits - Makes it possible for some individuals that were convicted of offenses that federal code requires a lifetime disqualification for a commercial driver’s license (CDL), to be able to reapply for their CDL after a 10-year period has elapsed, in accordance with new FMCSA rules. LAW.  IFBF Policy #139 and Beliefs & Philosophies support.

H547 - Ballot Harvesting - Implements recommendations from a federal bi-partisan commission on election integrity to prevent some of the fraudulent activities that have occurred in several other states.  H547 prohibits anyone except family members from collecting and delivering ballots.  Anyone can still put their ballot in the mail to deliver it, or a family member can deliver up to 6 ballots to a county election office.  H547 was held in the Senate State Affairs Committee.  IFBF policy #99 supports.

H606 – Agriculture Aircraft - A bill to amend the state’s Right to Farm Act to protect the ability of agricultural aircraft to access ag land and treatment areas without the threat of nuisance claims. LAW. IFBF policy #41 supports.

H608 - Stockwater Forfeiture Process - Clarifies the procedures used to forfeit stockwater rights.  The BLM and FS have thousands of stockwater rights in Idaho, but they have no livestock to put the water to beneficial use.  Therefore, after five years of non-use their stockwater rights can be forfeited.  H608 adds a layer of due process that is required by federal law to ensure that our process is legally binding on the federal government. LAW. IFBF policy #29 supports.

H673 - New Construction Roll - Clarifies that local governments cannot expand their budgets each year by the value of land that is associated with new construction.  This will help keep budgets a bit leaner and will lead to lower taxes than would otherwise occur.  LAW.  IFBF policy #86 supports.

H698 - Workers’ Comp, Vaccine Injuries - Clarifies that injuries sustained by employees from a COVID-19 vaccine that was taken as a requirement of employment would be covered by the employer’s workers’ compensation insurance. This clarification would prevent third-party lawsuits.  Held in Senate Commerce and Human Resources Committee – IFBF Policy #76 Supports.

H705 and S1262 – Firearm Rights -  Ensures that a declared state of emergency may not be used as an excuse by government to seize or otherwise limit or outlaw any firearms, ammunition, or other components of firearms.  LAW. IFBF policy #142 supports.

H715 - Tax Returns - Equalizes the statute of limitations for adjusting income tax returns in Idaho.  Currently, if an individual finds they made an error in their income taxes, they can only go back three years to get a refund of any over-payment.  However, if the state finds you made an error, they can go back 10 years to collect any taxes owed.  H715 simply allows an Idaho taxpayer to have the same opportunity to go back 10 years as the state has.  For years four through ten, the taxpayer can only receive a credit against future taxes rather than receive a refund.  LAW.  IFBF policy #93 supports.

H735a - County Charity Levy - Begins the transition towards the state taking over the responsibility of paying for public defenders rather than local governments.   This will allow counties to repeal their charity levy which was normally used to pay for public defenders.  This will provide just over $20 million in property tax relief across the state.  LAW.  IFBF policy #80 supports.

HJM005 - Washington, Fuel Tax, Exports - Urges Washington’s Governor to veto a specific fuel tax bill if it was to end up on the Governor’s desk. The bill would have established a tax on fuel exported out of Washington to be paid by the out of state purchasers, which is unconstitutional.  The bill ultimately did not advance in Washington.  ADOPTED – IFBF Policy #79 Supports.

SCR115 - Education, Civic Standards - Lays out the importance of civic engagement and education. Establishes a stakeholder group to develop stand-alone standards for civics instruction for consideration by the State Board of Education and legislature. The standards are expected to emphasize the importance of teaching natural law as recognized by the American Founders.   ADOPTED – IFBF policy #106 supports.