“The wise and correct course to follow in taxation and all other economic legislation is not to destroy those who have already secured success but to create conditions under which everyone will have a better chance to be successful.” President Calvin Coolidge 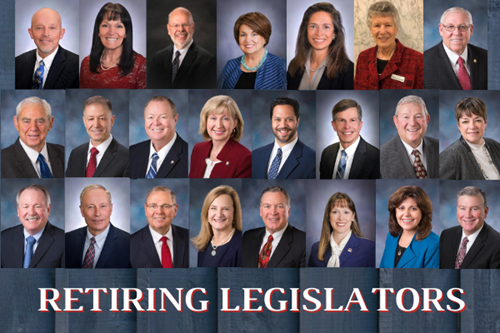 BOISE- This election year is bringing many retirements with it. Below is the list of incumbents who have announced they will not be running again for re-election.

Aside from retirements, there are also incumbent House members that are now leaving their current seat to run for a Senate seat, below is the list of those legislators.

Speaker of the House

A Furious Race to the Finish Line 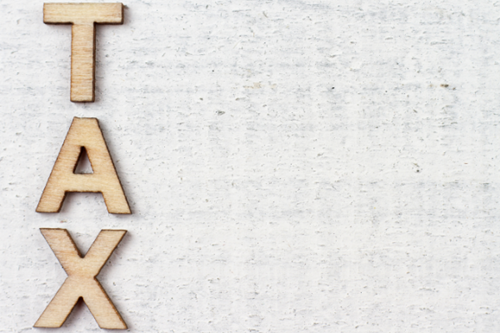 Here is a brief update on a few bills Farm Bureau has been following related to taxes:

H436 permanently reduces the top marginal income tax rate from 6.5% to 6%.  The corporate income tax rate is also reduced to 6%.  H436 also provides a one-time rebate of approximately 12% of individual’s 2020 income tax liability, or $75 per dependent, whichever is greater.  Those checks will be distributed over the next several months.  H436 has passed both chambers and been signed into law.  AFBF policy #436 supports H436.

H575 would prohibit county commissions from entering into long-term leases for jails or courthouses without securing a majority vote of the people.  Unfortunately, the Idaho Supreme Court has ruled that long-term leases are not obligated to secure a vote of the people, notwithstanding the requirement in the Idaho Constitution.  H575 is a good step towards fulfilling the constitutional requirement that local governments not incur long-term debt without a 2/3 vote of the people.  H575 has now passed both the House and Senate and is awaiting the signature of the Governor.  IFBF policy #92 supports H575.

H673 clarifies that local governments cannot expand their budgets each year by the value of land that is associated with new construction.  This will help keep budgets a bit leaner and will lead to lower taxes than would otherwise occur.  Both the House and Senate have approved H673 and it is now awaiting the signature of the Governor.  IFBF policy #86 supports H673.

H715 equalizes the statute of limitations for adjusting income tax returns in Idaho.  Currently, if an individual finds they made an error in their income taxes, they can only go back 3 years to get a refund of any over-payment.  However, if the state finds you made an error, they can go back 10 years to collect any taxes owed.  H715 simply allows an Idaho taxpayer to have the same opportunity to go back 10 years as the state has.  For years 4 through 10, the taxpayer can only receive a credit against future taxes rather than receive a refund.  H715 has been approved by both the House and Senate and is awaiting the Governor’s signature.  IFBF policy #93 supports H715.

H735a begins the transition towards the state taking over the responsibility of paying for public defenders rather than local governments. This will allow counties to repeal their charity levy which was normally used to pay for public defenders.  This will provide just over $20 million in property tax relief across the state.  H735a passed through the House, then was amended by the Senate, and was then approved by the House as amended. It is now awaiting the Governor’s signature.  IFBF policy #80 supports H735a.

IFBF’s Final Intern of the 2022 Session 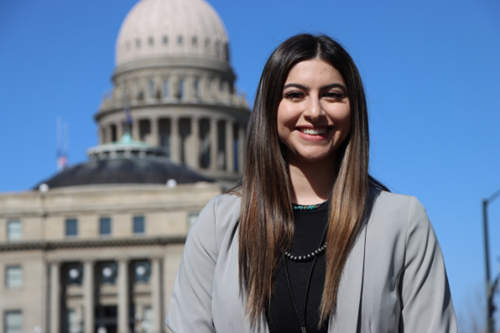 BOISE- My name is Erin Daniels. I am from Caldwell, Idaho, and a second-year student at the University of Idaho studying a B.S. in Rangeland Management with minors in Agribusiness and Animal Science. I am an active member of the Collegiate Young Farmers and Ranchers (CYFNR), Student Idaho Cattle Association, and Range Club. I initially heard about the internship through being a member of CYFNR and didn’t think too much of it, as I would be a fish out of water with how little I knew about Idaho Farm Bureau and our legislative system. I worked for the U.S. Forest Service as a rangeland technician last summer and decided that I could broaden my knowledge and try something new. After a leap of faith, I decided to reach out to do the internship.

Growing up, I did not know much about the agricultural industry, but had a love for riding and showing horses which grew my interest and passion for the industry. While I don’t have a background in ag, it has pushed me even more to reach out to people and gain experience in any way I can. Through this internship, I have gained connections through agricultural industry leaders, senators, and representatives. I learned that being bold and introducing myself to anyone with a name tag would impact me, no matter how small the conversation was. Every conversation I had was impactful and truly inspired me to follow my passion and further my education.

My time as an intern for the Idaho Farm Bureau was like drinking water from a fire hose. I can confidently say that I did not know anything about the government at the state level, so there was a lot to learn. There was so much information poured into me on my first day, and until the end, I continued to ask questions to make sure that I fully understood. Chyla, Braden, Russ, and Quinne took copious amounts of time to educate me and fully submerge me into learning about the grass-roots system, (a term I love being a range major) and how it works.

I cannot thank everyone enough for taking the time to educate me on the legislative process, the governmental affairs team, and the Idaho Farm Bureau as a whole. It completely changed my life through connections, education, and even the ag industry. It has driven my passion to a whole new level. I recommend anyone for this internship who is passionate about the ag industry, about our state government, and just learning in general. 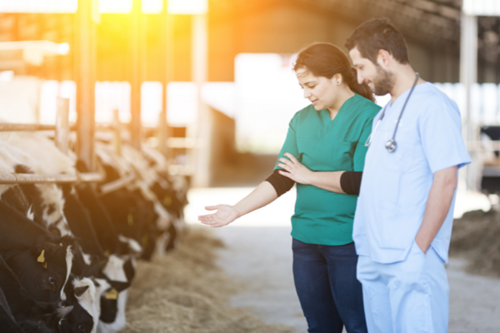 BOISE- The House Agriculture Affairs Committee held a hearing on S1380 this week. The hearing spread across two days, with many questions from the committee and public testimony. Ultimately the bill failed to pass the committee on a vote 6-8. It was expressed by nearly all members of the committee that they recognize there is a problem. Some that voted against the bill communicated their support of the concept of the bill; however, they had concerns with certain aspects of the specific bill. Several legislators have approached the industry stakeholders with interest to bring back a new version of the bill next year.