Canals and ditches are not waste disposal systems 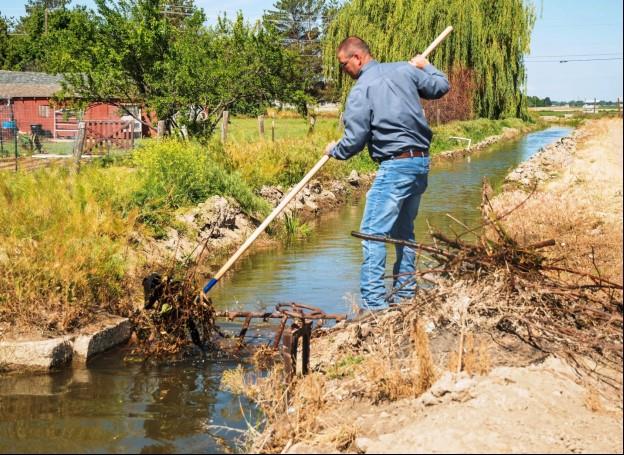 MERIDIAN – That canal or ditch next to your backyard is not a convenient trash disposal system to dump your lawn clippings and tree branches, old tires, fence, garden waste or other debris, so don’t use it like it is.

That’s the message from the Treasure Valley’s irrigation delivery entities that operate approximately 1,500 miles of canals, laterals and ditches that carry and deliver precious irrigation water to agricultural and residential water users.

“We find discarded household items, trash, tires, batteries, lawn clippings and tree limbs,” said Mark Zirschky, Pioneer Irrigation District’s water superintendent. “When water was coming in this year we found a pile of trash that consisted of TVs, mattresses, coffee tables and even a recliner.  It would have been a real mess had the ditch rider not made an additional trip and cleared all of this debris ahead of the water being turned in.”

Zirschky also noted that the dumping problem onto Pioneer’s easements seems to have been a lot worse since the local landfill has been more selective on items allowed to be discarded.

“It is a serious problem for our irrigation delivery entities and it has only gotten worse with the strong residential and commercial growth we are experiencing,” said Roger Batt, executive director of the Treasure Valley Water Users Association, which represents irrigation districts and canal companies in the region.

Those entities manage a water delivery system of more than 1,500 miles of canals and laterals that deliver water to farms and ranches as well as golf courses, subdivisions, parks and municipalities.

“It’s really frustrating that some folks look at a canal as a waste disposal system, and it’s a shame that the taxpayers of those irrigation delivery entities have to fund trash removal,” Batt said.

“For the new Idaho resident, the canal behind their home is an ‘out-of-sight out-of-mind’ place to get rid of their lawn and garden litter, including the limbs they have trimmed from their trees, even the remnants of building materials left by the home builder,” said Mack Myers of Settler’s Irrigation District, whose system serves a large contingent of residential areas that is experiencing a growing problem with unlawful dumping in the system’s canals.

What happens is that ‘out-of-sight’ debris floats down the canal and becomes someone else’s problem. The junk then builds up as it lodges against trash racks and creates a potential for serious flooding and damage to private property. It can also reduce the amount of water available to downstream users who have paid for the use of their irrigation water.

The amount of residential landscaping waste being dumped into canals has been growing steadily with the population expansion in the Treasure Valley.

“Our ditch riders are checking the system every day just to keep the racks free of trash and it is consuming more and more of their time,” Batt said. “It is also a problem when people dump debris onto an easement or right-of-way (usually over a fence) that may be above or near a canal or ditch, and then the debris eventually ends up in the water.”

Debris in canals and ditches is also causing an increasing problem for residents using pressurized irrigation systems that rely on pumping stations to supply water to their lawns, gardens and community park areas. Trash in the water can easily plug the pumps, cutting off the subdivision’s irrigation water supply.

“We continue to see lawn waste such as tree branches and lawn clippings thrown into our irrigation delivery system as a growing problem,” said Greg Curtis, water superintendent for the Nampa & Meridian Irrigation District, the largest Irrigation district in the Treasure Valley. “A month ago, an entire truck load of freshly cut tree trimmings was thrown into one of our canals – the Ridenbaugh – which almost caused the canal to overflow when it became logged in the check structure during the middle of the night. In addition to landscape waste we have found car batteries, transmissions, television and computer monitors, and even car engines.”

“We are dealing with reports of dumped motor oil, paint and other chemicals into our system more frequently,” Curtis said. “There was even one report of a private ditch with the water running some kind of green dye in it. When this happens, we have to notify the Department of Environmental Quality to conduct a full investigation.”

Lawn and garden waste dumped into canals can also create a potential environmental hazard to users due to the chemicals, including pesticides, that are used to treat the grass and other vegetation.

“That powerful pesticide that was applied to your lawn to kill bugs or weeds ends up on the lawn clippings that were dumped into the canal,” Batt said. “The residue then mixes with the water, which moves downstream where it can end up on someone else’s garden vegetables or flower beds.”

“It’s all about being a good neighbor to others,” Batt added. “Remember, you live upstream from someone else.”