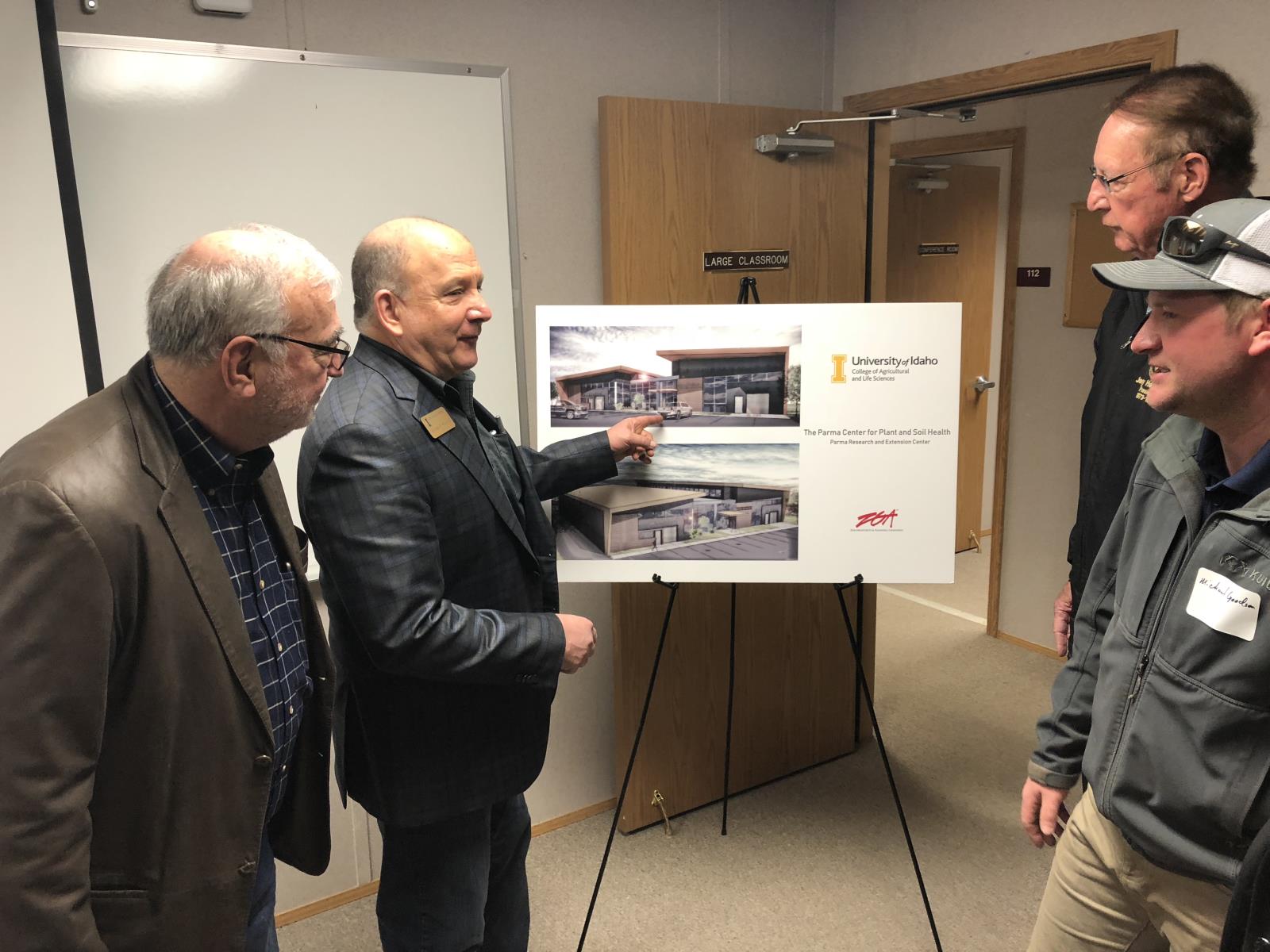 The Idaho Legislature approved a bill that provides $3 million in state money toward the project to upgrade the Parma research station. The legislation passed the House and Senate by a combined vote of 91-9 and Gov. Brad Little signed it into law March 17.

The legislation “speaks to broad support from the legislature and governor for the college and for agriculture,” said Michael Parrella, dean of UI’s College of Agricultural and Life Sciences, which oversees Parma and eight other ag and Extension research centers across the state. “We’re pretty excited about this.”

The college plans to break ground on the project next spring or summer and hopes to have it completed in 2023.

The modernized facility will include new graduate student housing, updated laboratories and equipment, new greenhouses and four new positions: an Extension fruit and viticulture specialist, a weed scientist, an irrigation and soil scientist and a scientist that specializes in pollination.

The renovation project represents a dramatic turnaround in the fate of the Parma research center, which was slated for closure in 2009 and was actually closed on paper at one point until members of the state’s agricultural industry rallied to keep it open.

Now it’s slated for a revival and industry again played a major role in making that happen.

A broad group of industry organizations, agribusinesses and individual farmers provided a total of $3 million in funding for the project. That includes $1.9 million from corporate partners and philanthropic foundations, $685,00 from agricultural commodity groups and $415,000 from individual donors and ag producers.

Parrella said it was nice to see industry step up and put “skin in the game.”

The Idaho Bean Commission was one of the groups that contributed financially to the renovation project.

“Parma is very important to the state’s bean industry,” said IBC Administrator Andi Woolf-Weibye. “It is a vital center for bean research in Idaho.”

Amalgamated Sugar Co. is contributing $500,000 to the project. Amalgamated is the second-largest beet sugar producer in the United States and operates plants in Nampa, Twin Falls and Paul.

“For years, agriculture in the Northwest has benefited greatly from the high-quality research performed at the facility,” Amalgamated Sugar CEO John McCreedy said in a news release announcing the company’s contribution. “The investments in state-of-the-art plant and soil health facilities by the state of Idaho, University of Idaho and the private sector will continue the tradition of delivering top-notch agricultural research to all stakeholders.”

During a tour of the Parma facility in June 2016, shortly after taking over as the new CALS dean, Parrella told researchers and industry members that he solidly backed the station and was fully committed to investing in it.

In March 2018, Parrella hosted a listening session on the future of the Parma station with dozens of industry members.

That was the genesis of the current renovation plan and the four new research positions are a direct result of what industry stakeholders said they wanted at the Parma station, Parrella said.

“It’s not the university suggesting these new positions,” he said. “They really came from the industry and we’re responding to what they need.”

Parrella said the research conducted at Parma will benefit farmers across the state, not just in that region. The four new research positions that will be added there will bring the total number of research faculty at the Parma center to 10 and they will study everything from bugs to weeds to water and soil, in addition to crops.

“We’re excited about what the (upgraded Parma center) will bring to the state’s agricultural industry,” he said.

The Parma ag research station was built in 1925 and the facilities there are more than 50 years old and badly in need of upgrading, Parrella said.

The college’s other ag research stations around the state also need to be upgraded, he said.

“The goal is absolutely to look at each of the research and Extension centers and see what kind of investment is needed there,” he said. “We’re hoping that Parma is a model that can be followed at those other R and E centers.”

Carly Schoepflin, director of communications and strategic initiatives for CALS, said the college plans to use the successful Parma project as a template for investments at the other ag research centers.

“You start with a listening session, hear from industry, hear what they need at those facilities, and then create a shared vision that ideally benefits all parties,” she said.